Well…we successfully moved back over 200 feet to the MorRYDE parking lot Tuesday afternoon and then headed out to Iechy Da Brewery for dinner. We had a pint each of Big Pit Porter and then one of Cantankerous Irish Red…both were typically outstanding. Dinner was a Kellwood pizza…rosemary olive oil, ham, cheese, arugula and balsamic drizzled over the top after it cooked…a very good pizza as well with enough leftovers for lunch another day.

Wednesday morning we got up early, hitched and headed out…got almost as far south as US 20 from MorRYDE before we got an alarm on our trailer brakes so we turned around and headed back to get them sorted out. Our tech Paul originally had partially removed one of the ABS sensors as he thought he would need to be doing the journal bearings and had forgotten to push it back in. He took a quick look after hearing our alarm code and figured out what was wrong followed by the 2 minute fix to tap it back in…and then we were back on the road arriving 267 miles later in Casey IL.

Why Casey IL you ask? Well…it’s about 750 miles to New Horizons in Junction City KS…which is 3 days towing with reasonable daily miles…and we don’t have to get there until Sunday so we just divided it into 3 pretty equal segments and Casey was the first one. We’re spending 3 nights here as there is absolutely nothing at our next stop in Boonville MO. We originally thought that Casey would pretty much be a bust Fun Stuff© wise as well…and that we would basically just chill out for a couple of days, but Casey turned out to be much better than expected.

OK, Fun Stuff© first. Right before we got to our exit off of I-70 Neil noticed a sign that advertised the largest wind chime in the world and the largest golf tee in the world…so we figured there would at least be something to see. Connie did a little googling and found that Casey is the home to a whole bunch of World’s Largest whatevers. Turns out that they were all built by the same local guy who also was the mayor at one time…he decided they needed some tourist attractions to get people to visit. 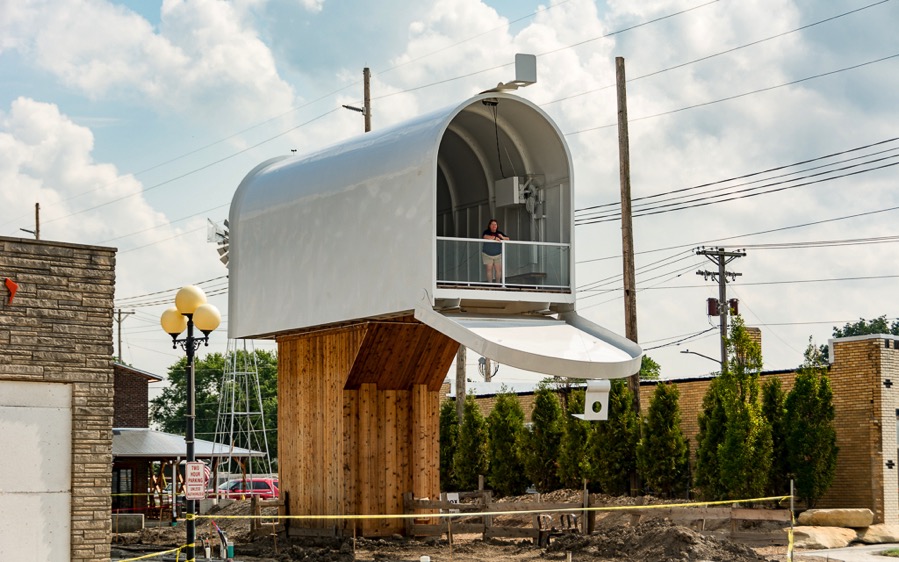 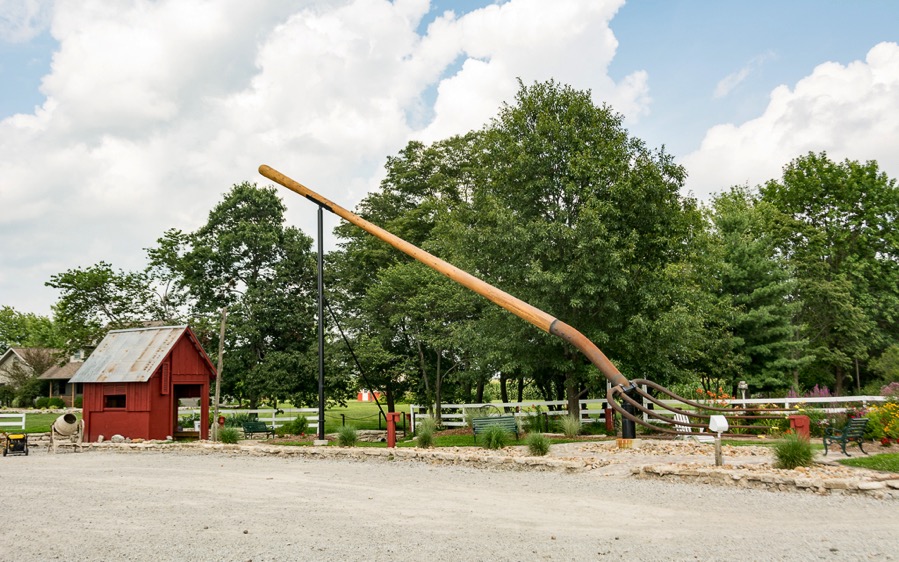 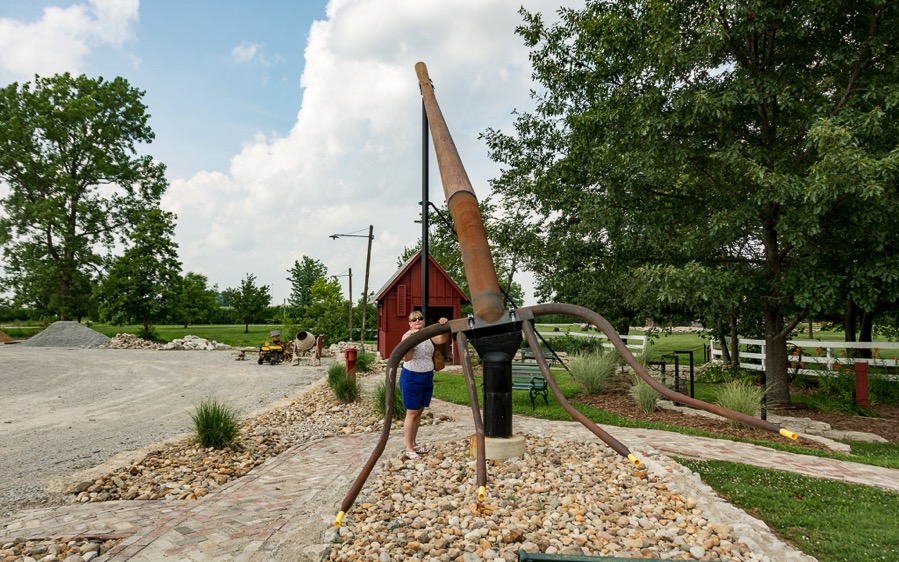 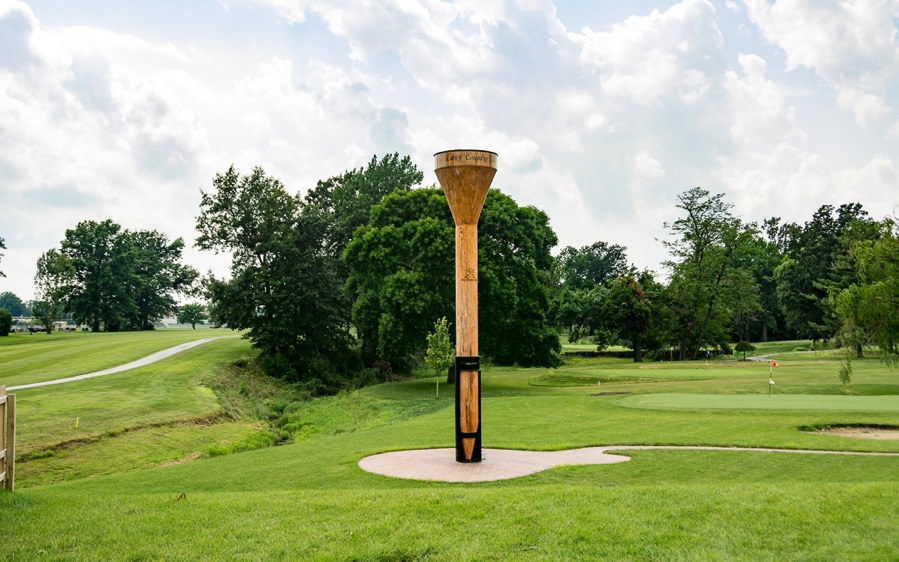 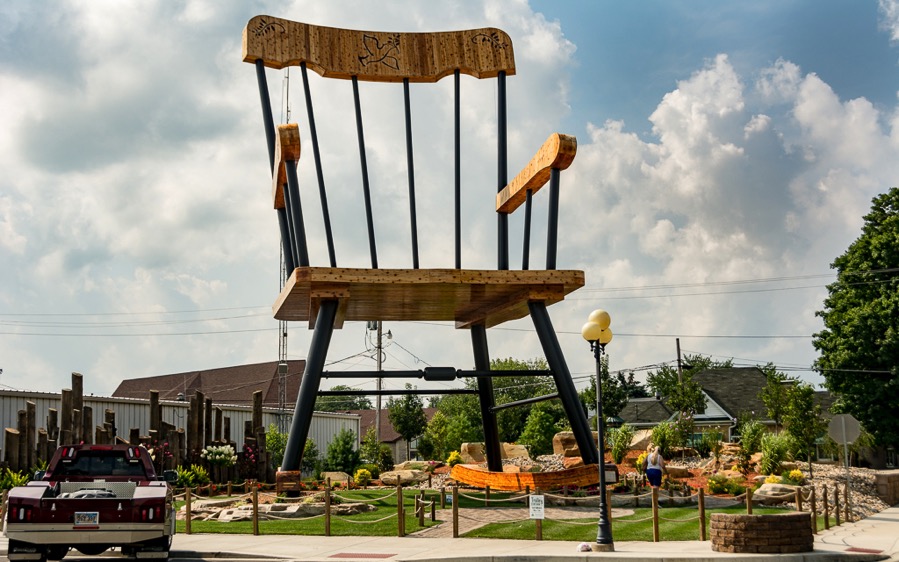 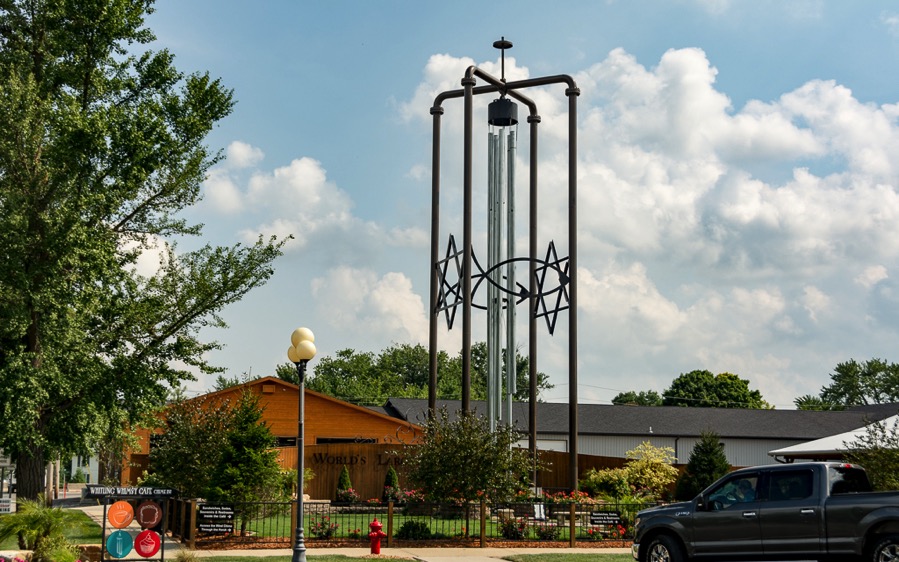 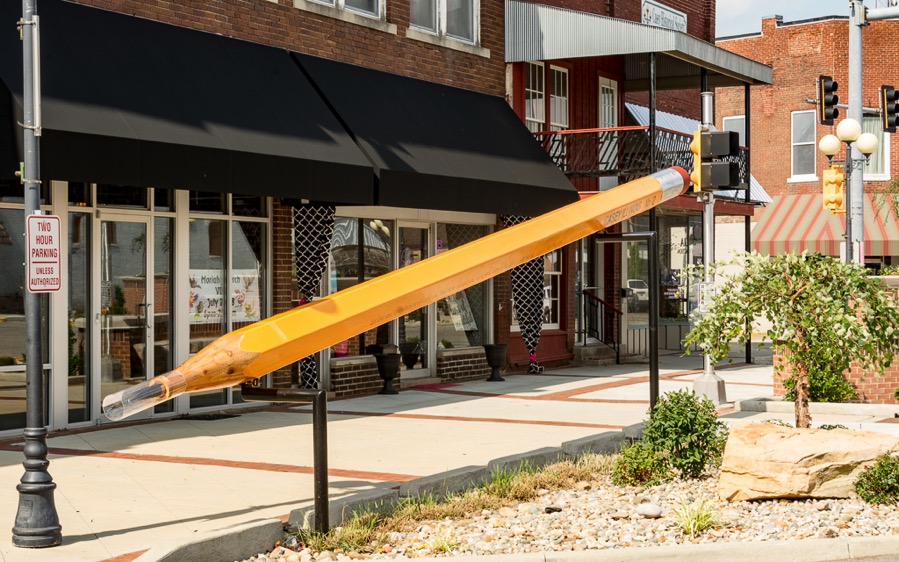 After visiting all of those we headed off to the Lincoln Log Cabin. When we first saw this we figured it was another of the half dozen or so places that claimed to be the “Boyhood Home of Abraham Lincoln”…if you remember from a couple of years back it seemed like we saw one of those after another as we traveled through Kentucky and then southern Illinois. We decided to go see it anyway and it turned out to actually be the home where Abe’s father Thomas Lincoln lived with his step-mother Sarah after Abe’s mother Nancy died. Abe had moved out on his own by that time and Thomas returned from Macon County to the Casey area and married the widow Sarah Johnston…who was an old friend. Abe bought 40 acres here and Thomas lived there until his death.

A couple of shots of a replica of Thomas’s cabin…the original was dismantled and moved to the Chicago World’s Fair and then disappeared due to some sort of dispute over who would run the concession there. This is a reconstruction done by the CCC in the 1930s using photos from 1891 and the oral recollections of people who had been in the original…there was a photo in the visitors center of the original cabin…and at least from the outside it looks identical. 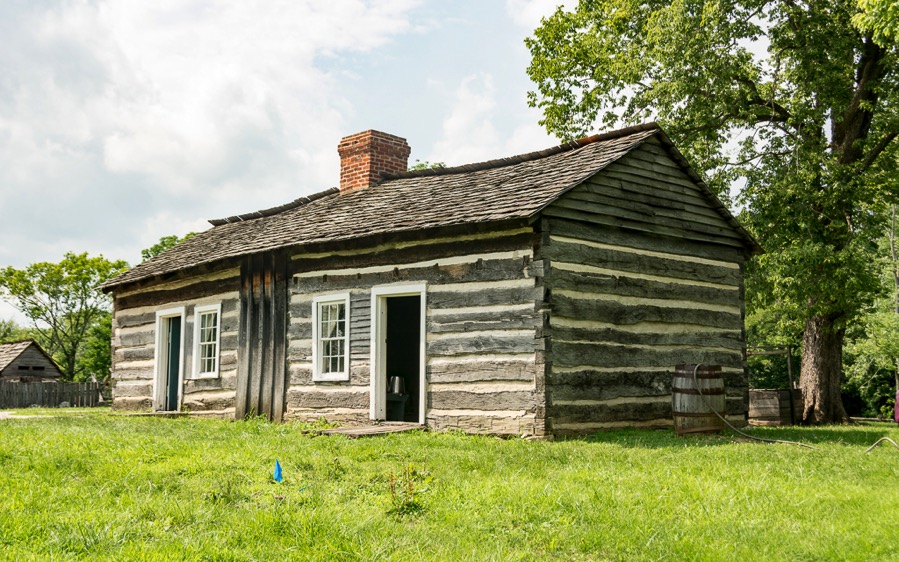 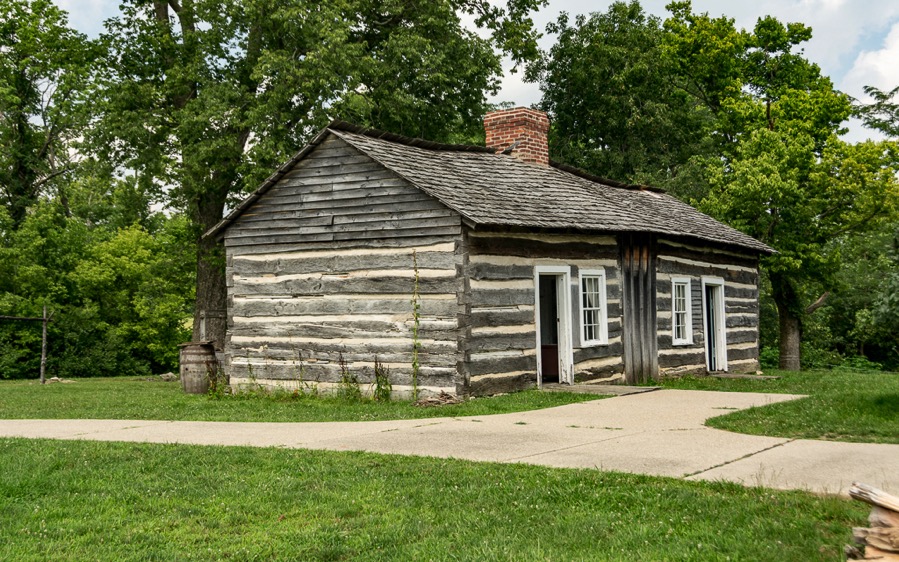 The site is now an Illinois Historical Site and contains both Thomas’s farm which was basically a subsistence operation and also the Sargent farm which was a Yankee owned commercial operation. The Sargent farm buildings are undergoing some sort of restoration operations…and hence were covered with tarps and construction equipment so we didn’t take photos of them…but the farmhouse was a larger clapboard sided structure rather than log construction and there were more outbuildings. What surprised us most about the Sargent farm was the construction guys…in one of the buildings where they had saws and construction stuff setup there was a radio playing…of all  things…classical music. While we whole heartedly approve of their music choice…we would never have expected to see a bunch of construction guys listening to the Tchaikovsky Piano Concerto #1.

The only wildlife of the day were these sheep running around the property. 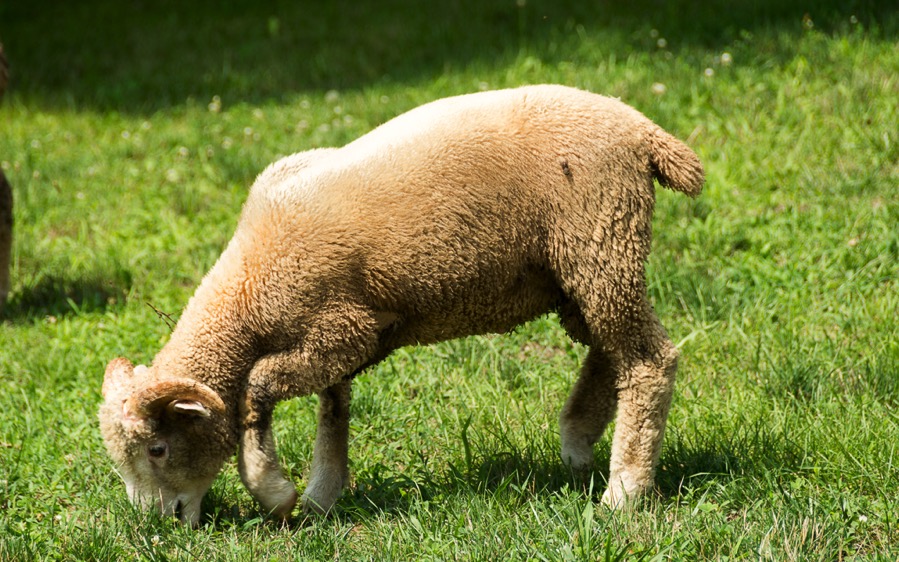 With our daily Fun Stuff© done…we got back into the car and Neil said “By the power invested in me as an officer and a gentleman by the United States Congress, I declare it to be beer o’clock.”…and we headed to downtown Casey for some liquid refreshment. We were desperately in need of it by this time…temps were in the mid 90s and the humidity was there as well so the heat index had to be over 100…it was really hot.

Our first option was this place named The Bar right near the railroad tracks…but it wasn’t open yet and looked pretty rough anyway…so we headed to the second option…a bar formerly known as the Kuhn’s Saloon but had been renamed to Down The Street. It looked pretty rough as well…but not as bad as The Bar and it had the advantage of being open.

We walked in…and Connie was immediately accosted by Town Drunk #6…Mikey turned out to be his name and despite it only being 1601 he was already pretty far down the inebriated path. He introduced himself…and almost immediately offered to buy us our second beer…which we accepted and then bought him one in return…so we actually came out ahead of the game on that one. Mikey is retired but his wife was still at work and was picking him up about 1700…he kept insisting that he would have his wife make us some blueberry cobbler and either bring it to our campsite or to the bar tomorrow…depending on which time he was making the offer (there were a half dozen at least).

He was friendly enough though…although we had to have him repeat about half of what he said as he was pretty drunk…we chatted with him for an hour or so before we decided to head off for dinner…the bar itself was pretty friendly as well so we may pop back by there again before we leave. Dinner was at Richard’s Farmhouse Restaurant…pretty decent steaks and we have enough left overs to make something out of for dinner tonight.

Today Connie’s going to work…and then we may head a few miles east to see the World’s Largest Anvil. Tomorrow we’re off to Boonville MO for a quick overnight stop at RV Express…which is basically a gravel parking lot off of the freeway before arriving in Junction City on Sunday.

2 Responses to Town Drunk Update and World’s Largest Whatever