At least, we’ve successfully arrived at Camp Horizons and at least according to one person here for service things have improved since Bryan T came on as general manager (or whatever his title is). We’ll see whether things have really improved starting next week. We have confirmed that we really don’t want to travel 5 days in a row unless we have some time constraint or emergency to meet…it’s just too hard. This would have been a better travel week if we traveled 3 days then took a day break before doing the other two travel days…but that would have meant we wouldn’t be first in line for next week’s service visits. I’m not sure that being first in line really makes any difference to your repair time…but at least you get your choice of parking spaces and over by the service bays is a heckovalot better than over in the low rent neighborhood to the south side of the factory.

We had a total of 1587 miles to transit from North Fort Myers to Junction City…so we were, almost exclusively, just driving down the freeway. However…a few interesting things did happen so let me quickly summarize.

Heading out early Monday morning 15 May…Neil had finished all the pre-underway stuff earlier so we were on the road by 0900ish for the 330 miles to Lake City FL. We had no issues and stayed overnight at Casey Jones RV…had leftover white pasta bolognese for dinner.

Tuesday we transited to Cartersville KOA in Cartersville GA…since we weren’t planning on dumping we just paid the lower rate for W/E hookups…but we choose poorly. The site had about a 3.5 degree tilt to port and we weren’t unhitching so leveling was not possible…but it was only overnight so we just lived with it. We walked about 1/3 of a mile up to the 2nd Half Sports Pub and Grill for dinner and sat down at the only two empty chairs at the bar. Connie was next to this guy that…at least on first blush…was a serious candidate for “Connie Meets the Town Drunk #7”. Yeah…Stevie was a couple of beers ahead of us but turned out to (a) not really be drunk, and (b) was actually a pretty interesting guy to talk to. He’s lived in both the US and the Philippines and is a long haul trucker living out of his rig. He told us about this time that he had rescued a toddler from a burning car…we weren’t sure whether this was a sea story or not until he pulled up the video from CNN of “Heroic Trucker Rescues Toddler in Jacksonville”. Sure enough…same guy so he was telling the truth at least about that…although I’m not so sure about his claim to have stayed in 4 of the 5 (or 5 of the 6, can’t remember) 5 Star resorts in the Philippines, which he said meant they cost $10,000 per night…not sure how a long haul trucker could afford that but I digress. Anyways…we passed a pleasant hour at the pub with a couple of frosty brews and a couple of mighty darn good Italian Sausage sandwiches with onions and peppers. Great place to stop but Pro Tip©…make sure you stay in the premium sites if you stop at this particular KOA.

Wednesday we pressed on to Eddyville KY and overnighted at Murphy’s Outback RV…another pretty decent campground pick by the DLETC. Dinner was fish filets from the freezer and leftover corn casserole from Mothers Day.

Thursday was the long day…416 miles to Higginsville MO where we overnighted at Great Escape RV. We were watching the weather on the way west after getting past St. Louis and there were severe thunderstorms and tornado watches in the Junction City area…and it was all heading directly east towards Higginsville so we kept an eye on it. Dinner was a meatball sub from Subway an we put our satellite dish down before we went to bed just in case. We had a severe thunderstorm watch but no tornado warnings for Higginsville and only got a little weather…5 minutes of small hail, 20 minutes of 40 or so miles an hour wind but it was from directly behind us so didn’t bother us much, and a couple of hours of rain with maybe 30 minutes of hard rain.

Friday we headed the last 220 miles or so to Junction City…we always get off of I-70 on the way through there to avoid the tolls on the Kansas Turnpike. Our normal route is I-435 south and then KS-10 and US-40 over to Topeka and then back onto I-70…but construction and an overturned vehicle on I-435 meant the GPS (more on that in a bit)  gave us warning of a 30+ minute delay and suggested an alternate route through the city. Since she had done so well the day before taking us straight through St. Louis on I-70 with little traffic…we decided to follow her suggestion and took I-70 into the city then I-35 south to Edgerton then KS-56, KS-59, US-75, and I-470 back to I-70 at Topeka. Nice roads and all 4 lane limited access highway except for 22 miles on KS-59. We drove through some serious rain on the way over but it had mostly cleared by the time we got here…and Neil rescued a small turtle at a potty break (details in a minute as well). Instead of just parking in front of the service bay like we originally thought…Connie went in to verity with Ken that he didn’t need us parked somewhere else…that took up 15 minutes as he was on the phone which meant that by the time we got parked it was raining again. We got power on and the front jacks down and headed inside to wait out the now torrential rain.

Naturally…since we were expecting it and since DirectTV told us it was on the way…our Genie HD DVR upgrade did not arrive…I swear those morons have worse service than even phone companies…so while waiting out the rain Neil called and verified that our tech was still on track for install Monday morning and would have a unit with him. The tech guy put some notes in the work order…and supposedly that will be sufficient for the tech to actually do the activation in an RV as they make this process way, way harder than it needs to be.

The rain stopped for a couple hours and we got unhitched, leveled, and utilities on then hit the Elks Lodge for dinner. We met our friend Robert Schwartz in ‘meat space’ for the first time as opposed to all previous meetings being in virtual space…and are going to have brews and dinner with him today.

Ok…turtle rescue time. We had stopped at Jim Bob’s Truck Stop somewhere west of KC…we needed a potty break and a donut for Morning Snack© and on the way out of the store there we headed back towards the truck…when out of nowhere in the middle of a concrete pad probably 100 yards square Neil spies this little turtle about 2 inches long running for his life…but he was running (a) toward the center of the concrete and (b) right where the trucks were gonna pull out of the fuel pumps. So…being a nature kinda guy…Neil grabbed him and carried him over to the grass outside the concrete behind where he had parked the rig. Cute little guy.

So here we sit…at least we’re almost the only rig here so the internet connectivity on the NH Service access point is really pretty good.

I was going to tell ya about our new GPS…when we hit the road we got ourselves a Garmin Nevi 465 which is a trucker GPS. The good thing about it is that you can put in your height, length, width, and weight and (mostly at least) it will route you around overpasses and bridges you should not be on. The bad thing was that due to limited memory and CPU power it also put you on the USDoT approved truck route and sometimes wanted to route you around places that RVs were allowed on but not trucks…this means a less convenient route. It also only had a 4 inch or so diagonal screen which was large for the day but is now pretty small. Anyway…after 5 summers on the road the battery (naturally a non replaceable one) was at the end of it’s useful life and while the unit still worked you had to reprogram it every time you stopped because it only worked when plugged in. So we went looking for a new one and found the Garmin RV 770 NA LMT-S. This is an RV specific unit with a 7 inch diagonal much brighter screen. Still has the dimensions capability but since it’s RV specific it doesn’t do that whole truck route thing. It’s also got voice command, full North American continent maps, lifetime traffic support, a more sophisticated routing/traffic avoidance algorithm due to having more CPU horsepower available, and an extensive database of speed limit changes, truck stops, campgrounds, Walmarts, eateries, sightseeing stuff, and pretty much everything else you could ask for…including a more sensitive GPS receiver so you can actually do your route planning inside the rig, with the old one you had to go outside so it could find the satellites. It was about $400 and so far has proven pretty reliable at getting you around delays and such. It will even connect via bluetooth to your phone for making hands free calls…but we skipped setting this up because Neil’s phone is paired with his auditory enablers (hearing aids…darn submarine engine room noise did his hearing in) and Big Red already lets you make hands free calls anyway.

It’s controls are a bit different from the old model 465 we had but we’re getting used to it and…mostly…it works like any of the other Garmin do. I can’t say whether a Rand McNally or other brand is any better or worse…my guess is not since the navigational and mapping data is all the same no matter what brand you buy and the only thing proprietary is the routing algorithm and even that starts from a common open source code base. But it works for us and we’re glad we got it. We kept the old one in Big Red for a spare since it does still work.

The new one also has direct connect to wifi capability for doing updates…this works way better than using the Garmin Express application which we’ve been using both on Neil’s MacBook Pro and under Windows 10 using the Parallels Desktop application…both of those apps have been problematic at actually communicating with the GPS unit in the past so putting the unit directly on wifi bypasses that and actually updates more quickly.

On to other interesting things of the week. 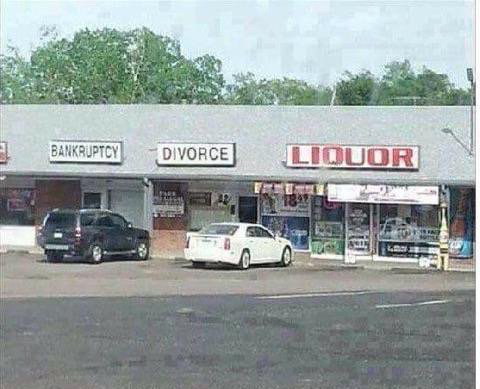 Here’s a guy that showed up to pick up his date for the prom…and got a couple of pointers from her dad’s bro’s…they probably said something like “no drinking, absolutely” and “when she says no…she means no”…while her expression clearly says “what the hell, dad.”

This is only advice from a tree of course…but it’s pretty darned good advice.

This is what golfers would call a water hazard.

Ya know what this is doncha…why it’s For Lease Navidad. 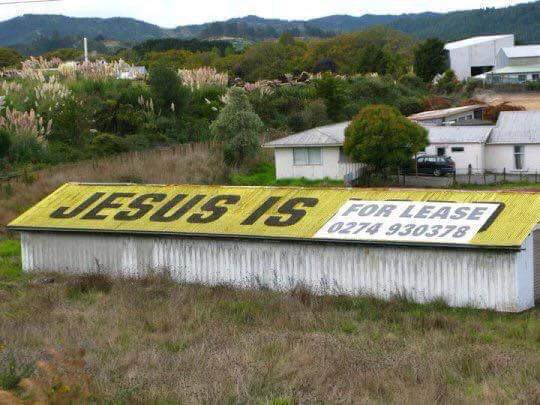 Guess there’s no bow or rifle season for ‘em here. 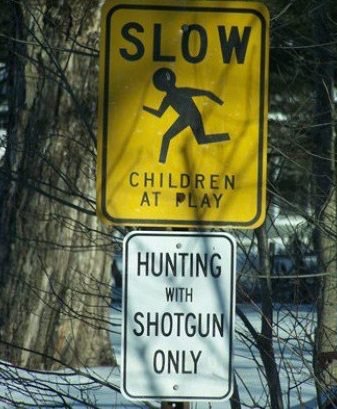 Cyas…hopefully our seal repair, power cord replacement and fiberglass ding (some trucker banked us in the parking lot along the way from FL…no idea where…but at least it’s just a small ding and a little putty and paint and “she’ll be raight” as the Aussies would say).