T Minus Eight and Counting

Ok…starting the last week here so it’s time for a report on our preparations.

Connie had her followup this week from her colonoscopy/endoscopy and got a clean bill of health…all of her biopsies were negative, she doesn’t have Barrett’s Esophagus as the doc thought was a possibility, and her drugs for her acid reflux are doing the job so she’s pretty much controlling that with no further treatment necessary at this point. She’ll need a repeat of both procedures in 5 years but other than that is “free to move about the country” as the car rental ad used to say.

Neil continued this banging stuff of the pre-underway checklist…everything is pretty much done except for refilling our propane tank and dump/flush/half fill the waste tanks with water, vinegar and Dawn but that will get done the last day before we leave. The idea is to leave them half full or so with the vinegar and degreaser and let the tank sloshing during travel clean the insides of them so that the tank level indicators will work correctly…they’re always starting to get a little flaky by the time we’ve been parked for the winter. We’ll let them slosh around the first two travel days and then dump/flush again when we arrive in Savannah GA on May 2.

Beyond that…it’s just normal packing before we leave…bikes on the rack, grill in the basement, take down the flagpole, sign, and our outside lights…and we’ll be pretty much ready to go.

Lets see…what else is goin’ on.

We keep heading out to the Elks on Tuesdays for Bingo, most Thursday’s for Tacos, and occasional Monday or Friday visits for chicken/fish respectively…we did increase the latter couple once we were into April as the snowbird crowd is mostly gone and hence the lines are shorter.

Connie’s been singing in what’s called the Resurrection Choir at St. Therese…there are a lot of Memorial Masses down here for folks that died and were buried up North but who had friends in both places. There seem to be a lot more of those than actual Funeral Masses…although the only real difference is that there’s no coffin at a Memorial Mass, urns turn up frequently though. She’s even scheduled herself for one the day before we leave…middle of the day next Monday…Neil told her she might have chosen……poorly as the aged knight would say…she decided to wait and see how busy we’re going to be that day before making up her mind and heading out…Neil will be busy that day flushing tanks but the likelihood she’ll participate in that is approximately somewhere between zero and negative infinity…and we’re doing the Broasted Chicken dinner at the Lodge that night to pass along our “until next times” to the our friends here and to generate leftovers for Tuesday night when we’ll be overnighting in Citra FL about 250 miles north of here. There’s a bar and grill across the street from the RV park that got decent reviews on Yelp…but it’s always good to have what we call…options.

We also need to pickup and put away all the stuff that gets left out inside for the winter…during travel season we have to do a better job of keeping things put away than we do when we’re parked.

Here’s a shot of the two eaglets today… 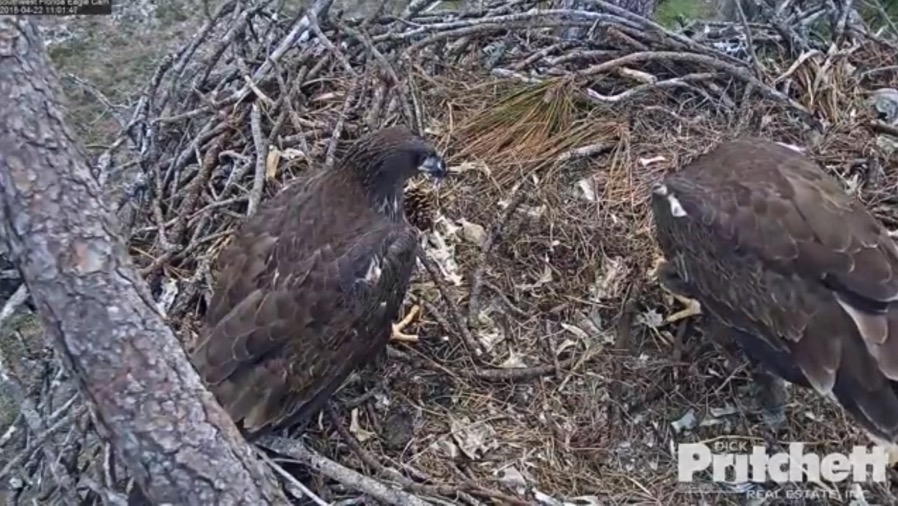 As you can see…they’re pretty much full grown at this point 116 days out from hatching. The adults are still bringing them food…at this point I would have thought they would be solely hunting on their own but apparently the adults will feed them until they actually depart the nesting area. Both are showing a lot of independence according to the blog on the eagle cam site…I actually thought they would be more independent at this point in life…previous years eaglets have been.

One photo for ya…a reprocessed shot of one of last year’s sunrise shots at Bryce Canyon UT…we got up at like 0330 for these. Neil took one of last summer’s unposted shots and worked with it in Luminar to get it looking a lot more like what it looked like with the eyeball. Like the bull elk shot I posted last time…it’s a lot easier to get photos that really pop with Luminar than it is with just Lightroom and it’s settings. Luminar is also going to include sometime this year a lot of the cataloging and image management features that Lightroom already has…if that comes to fruition and they’re actually worth using then he can see shifting over to Luminar as his primary management software. He’s taking a wait and see approach…he can always continue to manage in Lightroom and it includes the capability for export to Luminar/auto re-import the finished product to Lightroom. Adobe really would prefer you to export to Photoshop…which gives Adobe more money…and use it as the post processing program…but for non-experts getting great results is a lot more difficult in Photoshop as it’s got too many options and not enough “help the user” features in it. Luminar has filters with meaningful names like Smart Enhance, Golden Hour and the like…each of them has multiple sliders for the various settings unique to that filter so it’s not a matter of just clicking the filter…you still need to adjust the sliders in it to suit your needs for each image…but once you pick a filter…and you can stack the effects easily and mask them so they only affect parts of the image…there are a smaller set of slider options so one doesn’t get lost in the software. I’m sure that Photoshop could actually do everything Luminar does…but it’s a lot more work.

I really like the way this one came out…perfectly captures what it actually looked like that morning…crisp and cool with that really great yellow orange cast to the light and the sunbeams coming through the clouds as the sun rose just out of frame to the left. This shot was taken at Sunrise Point looking southward over the canyon. Sunset Point is a half mile or so to the west (right out of frame) and gets similar lighting to this but at sunset instead of sunrise…we visited both albeit Sunset Point was during the day and it was so crowded that we gave up trying to go back at sunset…besides the light is usually better at dawn anyway and the crowds were smaller. Not zero mind you…there were probably 50-75 peopled there that morning at 0535 when we arrived…the early rise time was so we could get coffee and drive the 45 minutes from the RV park which was literally right outside the gate of the park to the canyon itself, find a parking spot, and walk the 1/4 mile or so over to the point itself.

Interesting things found on the net this week… 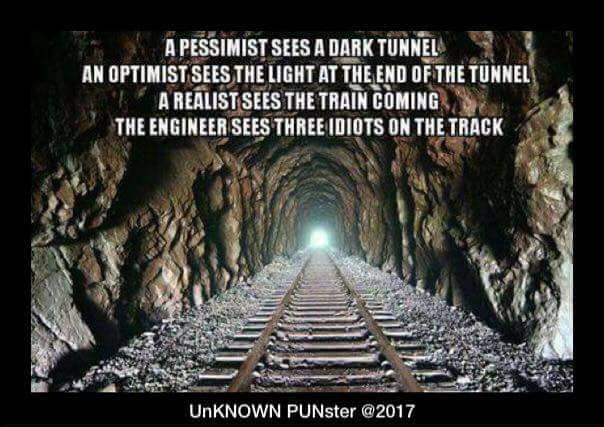 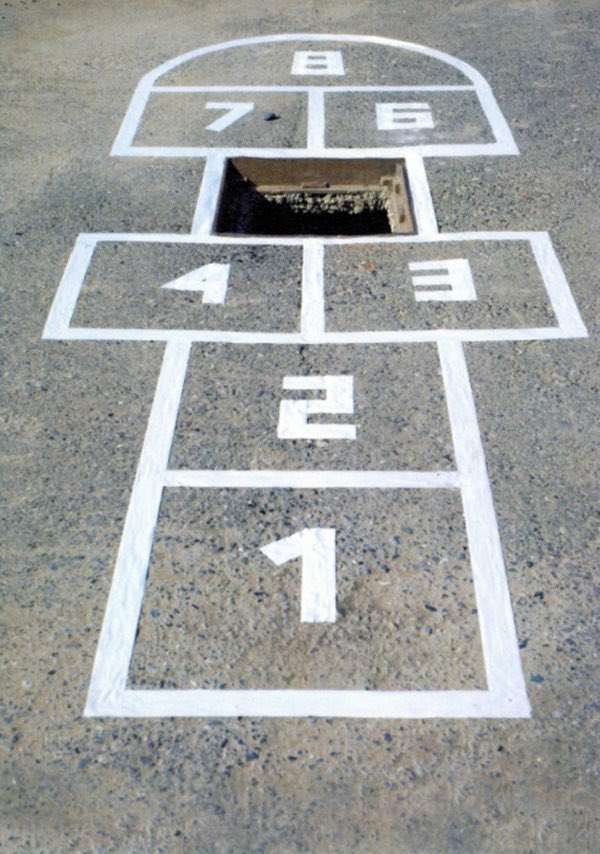 How true this one is

Just in case you were wondering

I think I’ll turn back now 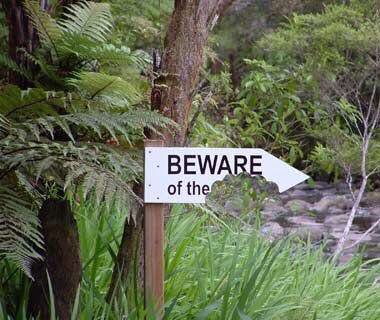 Not so secret then 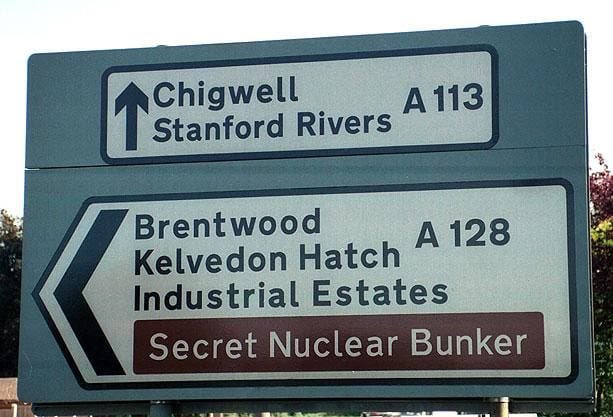 2 Responses to T Minus Eight and Counting