Sorry I haven’t posted since the first of the month…but we’ve actually been pretty busy ‘round these parts. We’re down to the last two weeks before we depart Seminole…and Neil has been hard at work checking off items on the pre-underway list.

We started with about 62 different items divided between Neil and Connie depending on who needed to do them and including a half dozen that are actually things we need to do either in the Richmond area while we’re visiting the human kids or in the DC area when we stop by there and we’re down just about 10 items left besides the Richmond and Fairfax ones.

Connie had a colonoscopy and endoscopy last week…and once again the prep is way worse than the actual procedure. She was on no nuts or seeds for 4 days then a liquid only diet on the day before…and then the dreaded clean out procedure starting in the afternoon the day before. Neil took care of her as best he could bringing her bullion, water, and various other things so she didn’t have to move around much. Last Tuesday she had her procedures…everything came out pretty much as expected so that’s one of the major items off the list.

Besides that…Neil’s accomplished a whole bunch of stuff like

As you can see…he’s been busy. It’s been hot so between the days that we had doctors appointments we’ve been getting up early so he can start on the day’s scheduled jobs by about 0830, that way he’s done by 1030 or 1100 before it gets too hot.

The eaglets have fledged the nest…although they’re still getting food delivered by the parents they’re actually as large as the adults are now. Here’s a shot of them sitting on the branch near the nest.

Neil’s also been working with his new photo processing software…Luminar as well as checking some new techniques with Aurora his HDR application. Here are a couple of shots from last travel season that he reprocessed.

These two shots came from the same exposure taken up at the Mammoth Hot Springs area in Yellowstone National Park…one was processed with Aurora and the other with Luminar. He likes the way both of them turned out.

Yellow aspen leaves in the fall at Rocky Mountain National Park…this is actually much more realistic to what it looked like with our eyes than the previous aspen shots I posted last fall.

A ram Bighorn Sheep along with one of his harem…this was taken near Rocky Mountain National Park but actually outside the park boundary on the river through the pass that leads to the park. 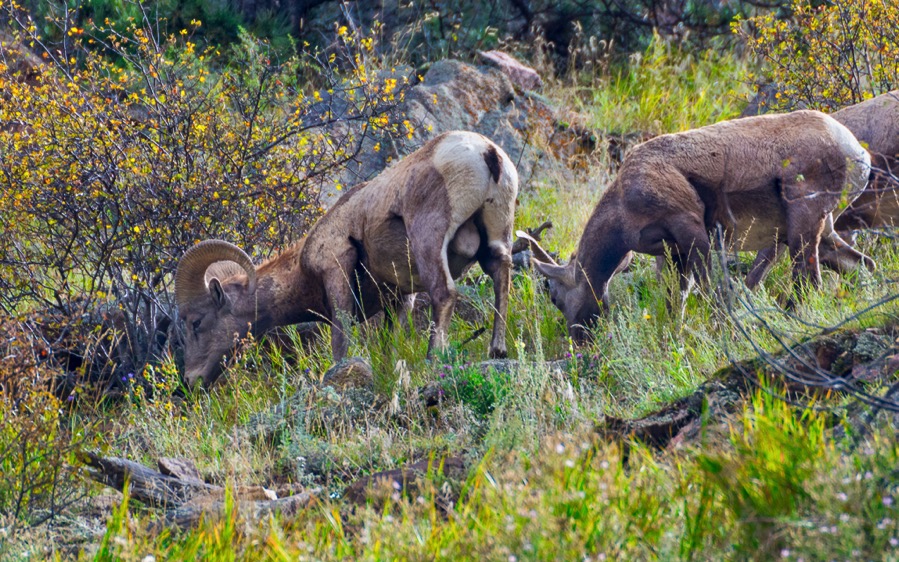 The Narrows on the Zion River at Zion National Park.

Bull elk crossing the Madison River between West Yellowstone MT and the western entrance to Yellowstone National Park…this was taken about 10 minutes after sunrise. The processing makes it look like a lot brighter than it really was…but I decided that being a bit brighter actually improved the photo…I did leave the Golden Hour orange light effect intact.

Sorry they’re mostly photos you’ve already seen similar shots of …although none of them are exact duplicates of what I posted last fall…but I figured I would give ya a little taste of what’s to come starting in just about 2 weeks. The scenery and wildlife up the east coast and into Canuckistan will be different than out west…not better but different. We’re really looking forward to getting back into the Fun Stuff© routine.

This guy has the world’s longest arm

Sign for a Bong Smoking Skateboarding Horse crossing I guess

And finally…ya know what these are of course