We had originally planned a visit to another lighthouse Sunday morning after Mass…but Connie woke up feeling poorly and it was raining so we blew it off and just came home after Mass. Our other scheduled activity for Sunday was a visit to the Irish Pub downtown for an early dinner and then the show Anne and Gilbert in the evening.

First up was dinner at the Olde Dublin Pub and Claddagh Oyster House…they share the same building and menu although there’s a separate kitchen in the pub upstairs for patrons up there. We started with a dozen Malpeque oysters on the half shell…these are smaller than what you would normally get in either the Outer Banks or the Gulf of Mexico coast but are pretty sweet and tasty…and at $1CN each quite a bargain…along with that Neil had a Guinness and Connie a Harp Irish Ale. Next up…we split a lobstah stuffed mushroom appetizer…I can confirm that there was cheese, buddah, and cream involved in addition to mushrooms and lobstah…then we ordered first 6 to split and then another 3 for Neil ‘cuz he was still hungry bacon wrapped scallops…again these were smallish but they were very tasty and were actually scallops as opposed to the fake ones made out of shark that you typically get. The way you can tell that they’re real scallops is that they’re not uniform…the ones punched out from a shark steak are uniform on size and thickness whereas real ones are variable. Connie had another Harp but Neil switched to Redbreast Irish Whiskey straight up with a dash of water in it to bloom the flavor and cut the harshness.

Turns out there’s a lemon shortage in Canuckistan…we talked about it with Ashley the bartender and another couple of other couples dining at the bar…because you meet a much better class of bum sitting at the bar dontchaknow…they had heard that it was a either a result of the retaliatory tariffs that were placed on US goods after the recent import tariffs the government imposed…or that there was a freeze that limited the lemon crop in California. Based on the fact that limes and oranges are readily available…and since the freeze area they talked about was pretty far north in California up by San Francisco which isn’t where the citrus groves are…I would guess it’s either the tariff or something completely unrelated. Anyways…since there were no lemons we had to squeeze lime wedges on our oysters…and we’re sold on using limes instead of lemons…they actually are better than lemons on oysters.

Here’s a shot of Ashley the bartender…holding up one of the aforementioned oyster seasoning limes for us.

Overall a really great meal…kinda on the pricey side but that’s because of the Irish whiskey…but the food was great, the company great, and we chatted with several other interesting folks at the bar. In fact…it was so good we went back Monday evening for more.

After that we walked ‘round the corner to The Guild which is a local playhouse…where we had prime seats 3 rows back right in the middle of the stage…for a production of Anne and Gilbert…which is sort of a sequel to Anne of Green Gables after she grew up. Gilbert was a boy in her class who teased her at first then later helped her manage the bullying children in the class after Anne was orphaned and adopted by the Cuthberts who owned a farm in PEI named Green Gables…later in life, at least according to the sequel…they fell in love and naturally lived happily ever after. It was romantic comedy with a cast of 22 that we counted…and was actually a lot more entertaining than we thought it would be.

Monday we headed off for our last day of PEI Fun Stuff© before heading out to Richibucto Village 120 miles up the coast from Charlottetown on Tuesday…after we pay the over $100 Canadian toll to get off of PEI.

Our first stop was at the Point Prim Lighthouse…which is the oldest lighthouse on PEI…it’s 61 feet high and was in service from 1841 to 1969, it had 13 keepers over the years with Angus Alexander Murchison being the longest serving at 35 years. It’s different from any other lighthouse in Canada save one…as it’s circular and constructed of brick…it’s counterpart with this construction is Fishgard Light in British Columbia.

Sorry ‘bout the number of lighthouse pictures you’ve had to see the past month…but the DLETC hasn’t found any waterfalls and since her hip has been hurting the hiking opportunities have been scarce lately. 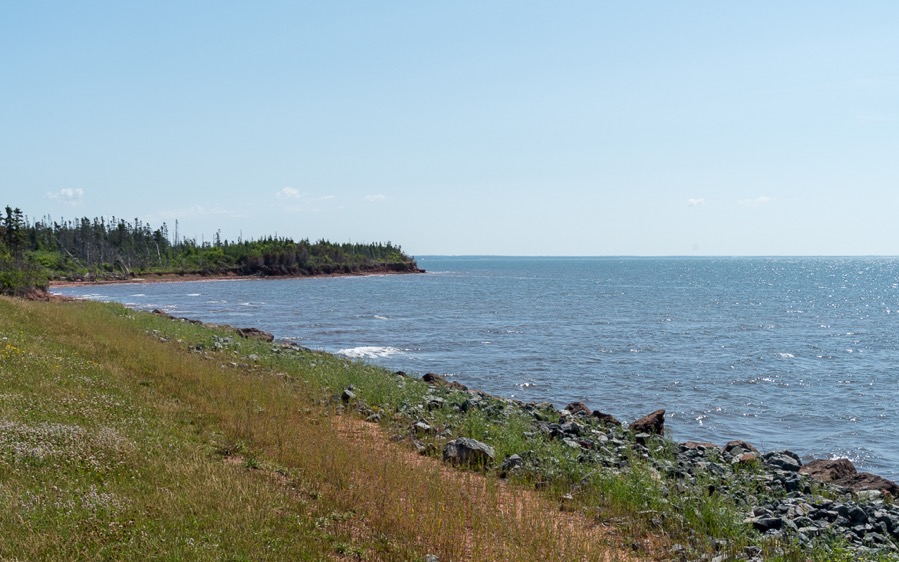 Point Prim is south and east of Charlottetown…after finishing up there we headed back through Charlottetown and then north to the campground…where we dropped off a few groceries we picked up on the way…then stopped and had ice cream for lunch…it was Mint Chocolate Chip Swirl for Neil and S’Mores for Connie…both were good, we decided that we could afford to have ice cream for lunch every once in awhile. Then we entered another section of PEI National Park up along the north coast of the island where we stopped by to see the Covehead Harbor Lighthouse right on the beach along with another couple of flowers. This light is still in operation and is smallish at only about 27 feet high…although it’s 20 feet or so above the beach so that increases it’s effective height.

With that…our day was done and we headed back to the rig. Neil put the grill and flagpole away in preparation for our travel day tomorrow…then we had a shower and Connie washed her hair as it was time again for that…then headed out to dinner and an early night of it.