Monday morning we were up and started getting ready to leave about 0800…we were done and out of the campground by 0915 for our 150 mile trip up NB-11 to Dalhousie NB…where our destination was Inch Arran RV Park right on the water in downtown Dalhousie.

The first 10 km or so out of the campground the road was pretty rough…so we just went 35 instead of the legal 50 mph speed…once on NB-11 it was smooth sailing all the way to Dalhousie…good weather, little traffic…and Connie was pretty happy about the way things were going.

On arrival at the campground though…things took a turn for the worse. We backed into our waterfront site 18, hooked up power…and it immediately tripped the breaker. After a half dozen or so tries including bypassing our Progressive Industries power management system…which checks both the pedestal and the rig for a whole series of faults…Neil plugged into the next site over 30 amp plug and it worked fine. So we left it plugged in there and asked the campground what they wanted to do about it. They decided it was a bad breaker, told us to stay plugged into site 19 over night as it was unused, and they would fix it in the morning…Monday was some sort of bank holiday here in Canuckistan. Unfortunately…they wasted an hour of our time before they figured that out. We tried to just change over and go into site 19 since it worked…but the curmudgeon in charge declined to do that as she would have to…her words…jumble the reservations and make 3 phone calls to let people know their site number had changed. Didn’t seem to be that hard to us…just put whoever was supposed to be in 19 in 18 after they fixed it…but I digress.

We headed out to the local pub for brews and dinner…and found out that it was permanently closed. We saw another pub…but it was also closed. We spotted a third…but it was closed as Monday was New Brunswick Day hereabouts. At that point we gave up, picked up a pizza and headed home to eat it and have a beer. Turns out we should probably have done something else as the pizza was barely adequate…but we wanted pizza so we gave it a go…had some leftovers we kept for lunch.

Tuesday morning…the electrician showed up and replaced the breaker…and we plugged back into site 18’s pedestal. Waited the 2 minutes and 15 seconds while our Progressive said everything was OK…then it tried to close the relay to put power to the rig and the breaker tripped again. The electrician checked site 19 that worked…and said that the only reason it worked was because site 19 didn’t have the GFCI connection to the breaker connected…and that the problem was clearly in the rig.

To further investigate…Neil opened all of our circuit breakers except the main incoming breaker and tried again…again the pedestal breaker on 18 tripped immediately…but it clearly ain’t the rig as nothing was connected with the breakers open. I guess there could theoretically be an issue with our cord reel or power cord…but if so then the fault should have been detected by our Progressive EMS.The real problem methinks is that the electrician didn’t want to have to fix it in a drizzle, he had already made $250 just to show up and replace the breaker and wasn’t looking to do any more work.

For those who are mystified by this electrical stuff…GCFII stands for Ground Fault Circuit Interrupter…it’s the kind of outlet that is in bathrooms and kitchens. Turns out that under the Canuckistan electrical code all outside wiring less than 6 feet above the ground has to have them. What the GFCI does is look for any problem in the ground system…in and of itself a ground fault isn’t a problem but if there is any other ground on the circuit then you get arcs and sparks and potentially electrocute yourself…GFCI outlets are required in bathrooms and kitchens due to the proximity of the outlet to water…if there was a fault in the real ground system and the outlet was touched with a wet hand then the person’s body becomes the ground and…as we say in the bidness…bad things happen. We’ve never seen campground pedestals that have GFCI requirements down in the US…but since we were hooked up to 30 amp power at Richibucto with no faults in the rig it’s most likely not us but something in then campground wiring.

So we hooked back up to 19…and told the campground to solve the problem. Don’t know what they’ll do…we again offered to move over to 19 since we had paid for a premium waterfront site…haven’t heard anything from them yet. Guess the folks supposed to park in 19 this afternoon will be pissed when they get here unless the campground solves the problem. We’ve verified as best we can that it’s not on the rig…power worked fine yesterday morning and while it’s possible we developed an electrical problem between 0900 and 1300…it’s not very likely.

Stay tuned for further developments…in the meantime let’s put in a couple of photos.

Two shots of the lighthouse right here in the campground from yesterday just before sunset…one was taken with Neil’s iPhone 6s+ and the other with his Nikon…those darned smartphone cameras are getting pretty darned good photo wise. 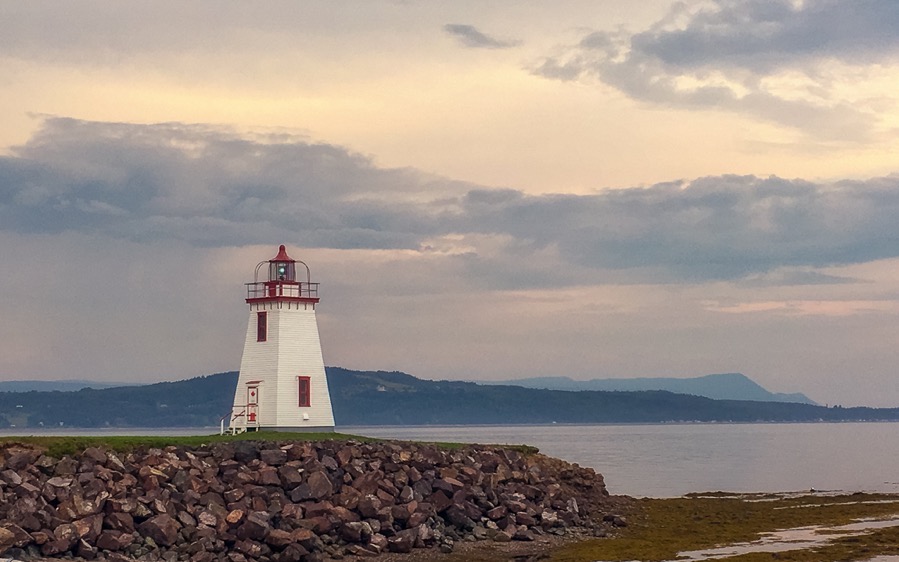 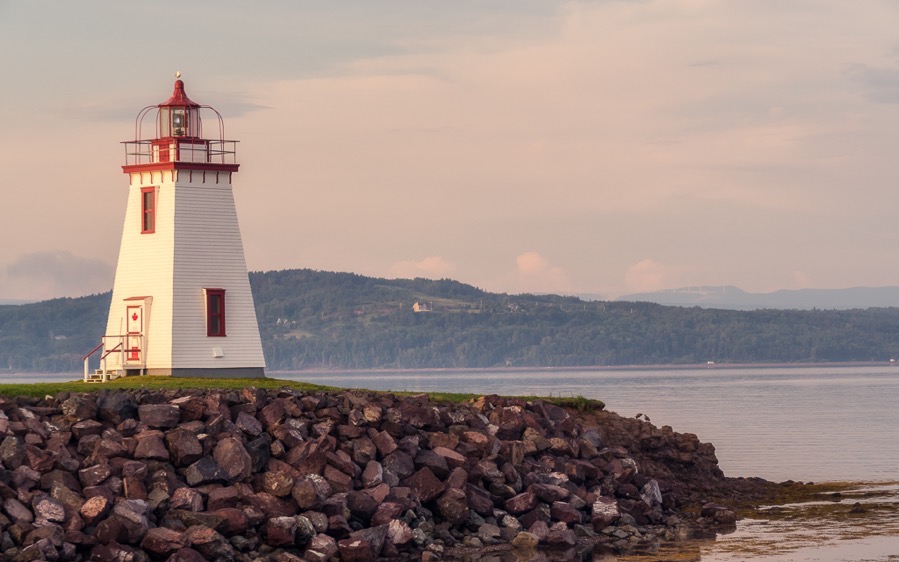 Right offshore are a set of rocks…plenty of shore birds nesting on them. 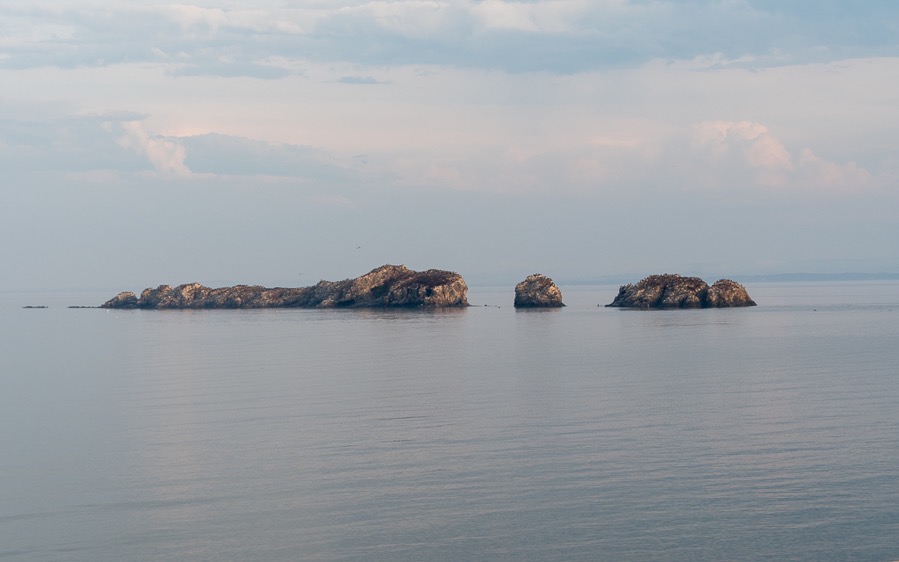 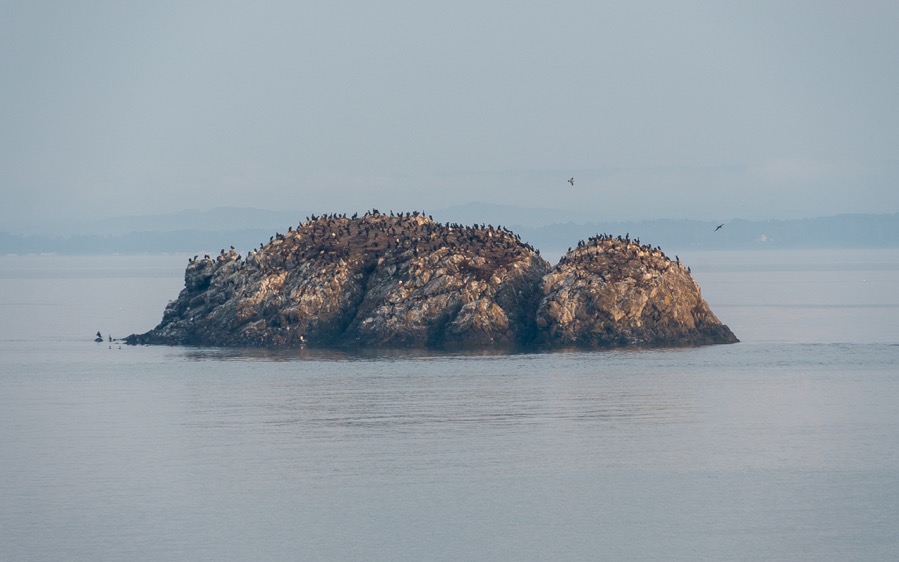 Ok…power update. About 1100 the guy with the duty in the office today came down and told us we could move over to site 19…gee, I thought that was too hard…but at least we got the ok to move to a site with power that works. The only drawback was that it was drizzling so we spent the next hour or so moving 1 site over and getting re-setup in the rain. After that we had our leftover pizza for lunch and have plans to try the pub thing again tonight…but we’ll take along the address for a backup or two over in Campbelton 10 miles or so west of here. According to this French Canadian lady who talked to Neil the Salt Waters Lounge we saw the sign for yesterday has food…assuming that she understood his question correctly.

The Church of the Chicken. 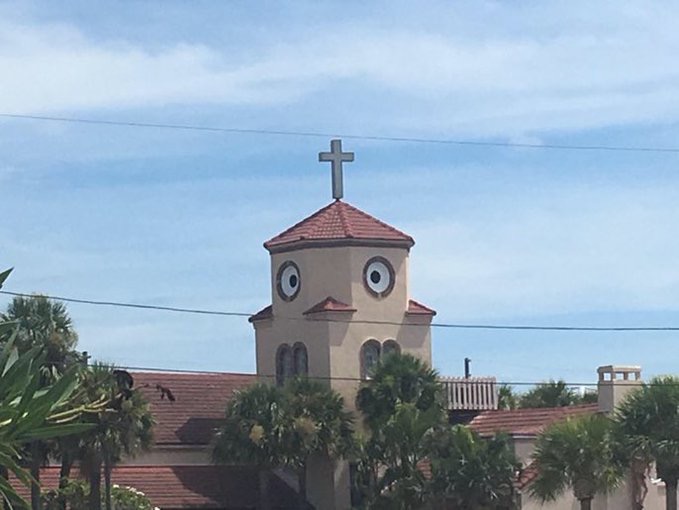 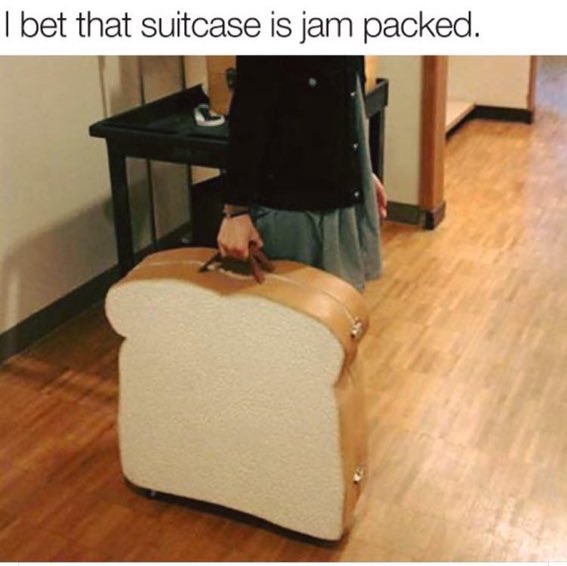 So the bar is closed I guess. 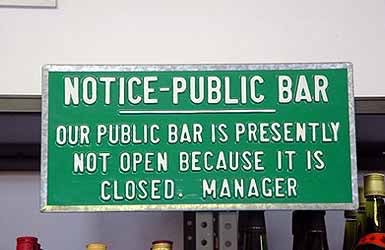 Can’t say I did know. 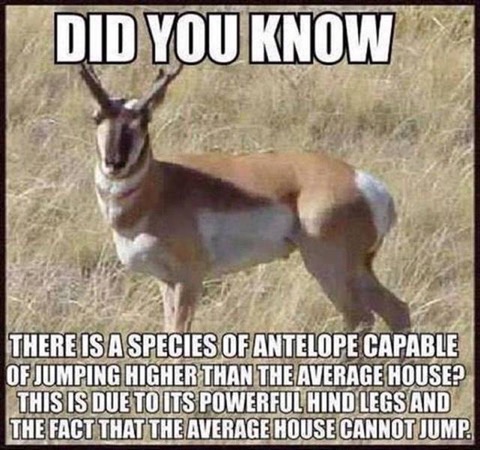