OK…moving along to a less unhappy subject…we’re well into our last day here in Cody…which coincidentally is also the penultimate (or next to last) day of no air as by Wednesday afternoon we’ll be at an elevation that starts with 2 rather than 5.

So…after the weekend where we had numerous calls/emails/texts/messages regarding Baby Sis with a lot of people…we pretty much did nothing. We did watch the Alabama game and as noted in the previous blog hoisted a cocktail or three to honor her but beyond that we went to Mass and did pretty much nothing.

We’ll miss the Elks Lodge here in Cody…they’re really friendly, have a non smoking section in the bar, and keep giving us free cocktails…not to mention the food is pretty good as well as inexpensive as Elks Lodges tend to be. What we won’t miss is the lack of air…we’re feeling the effects of the altitude significantly more than we did when we were last here in 2017. The other thing we won’t miss is the gosh-darned Small Minnow Mayflies…there’s a bazillion of the dang things. They don’t bite but fly into your face, land on your arms and everything else and are generally annoying. Every time you open the door to go in or out another 3 dozen of them fly in…we’ll be smacking them with the flyswatter for the next month I think. They breed in/near fresh water ponds…and since we are at the Cody Trout Ranch campground there’s a whole bunch of trout hatchery ponds just a couple hundred yards away. Once we get out of the campground they’re non existent but they are a real pain here unless the breeze is up a bit.

On Saturday we did head out for our final scheduled Fun Stuff© activity here in Cody…a trip back up the Chief Joseph Highway 20 miles or so then off into the Sunlight Basin area…essentially another canyon. We stopped by the Golden Arches right after sunrise then about 40 minutes drive out to the basin…we figured it would be prime wildlife viewing time…but alas we were wrong.

On the other hand…we did get some nice photos of the views and also had an unexpected surprise. 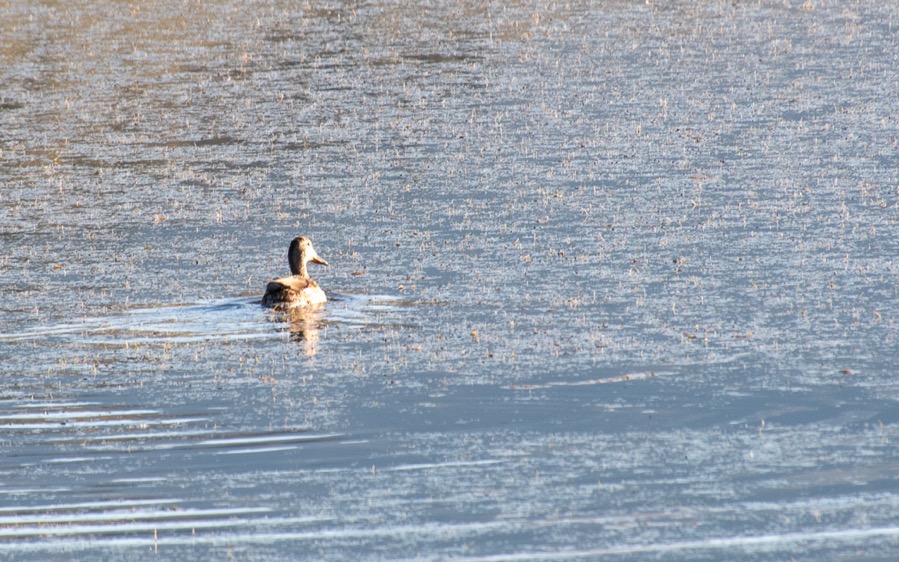 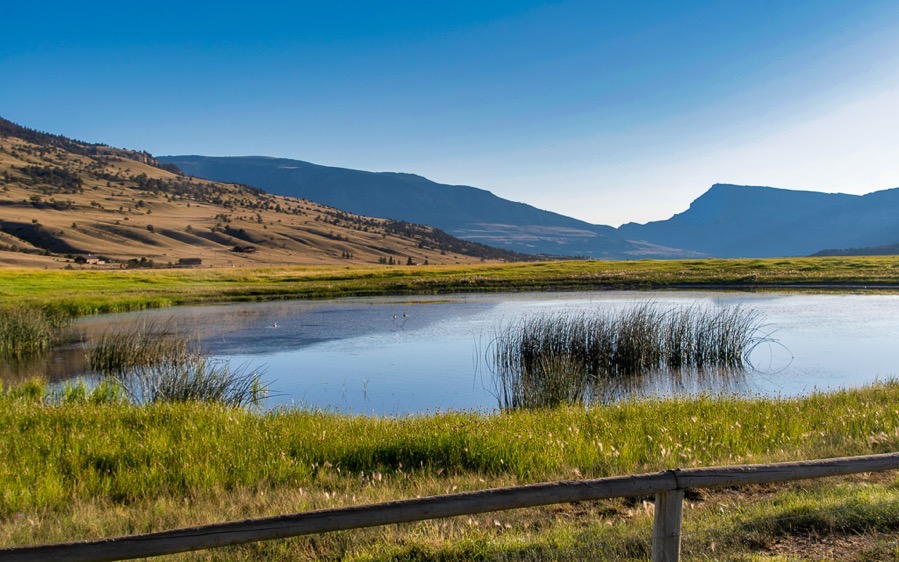 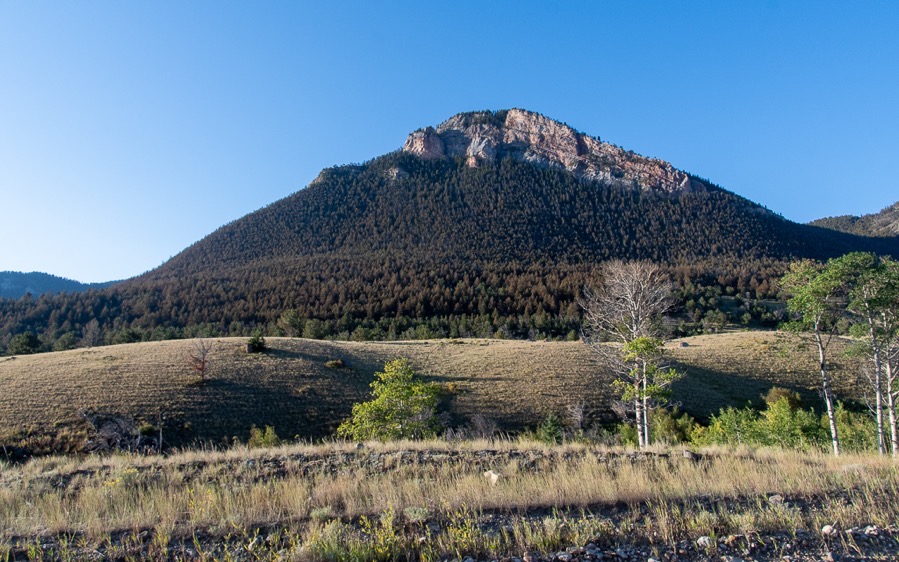 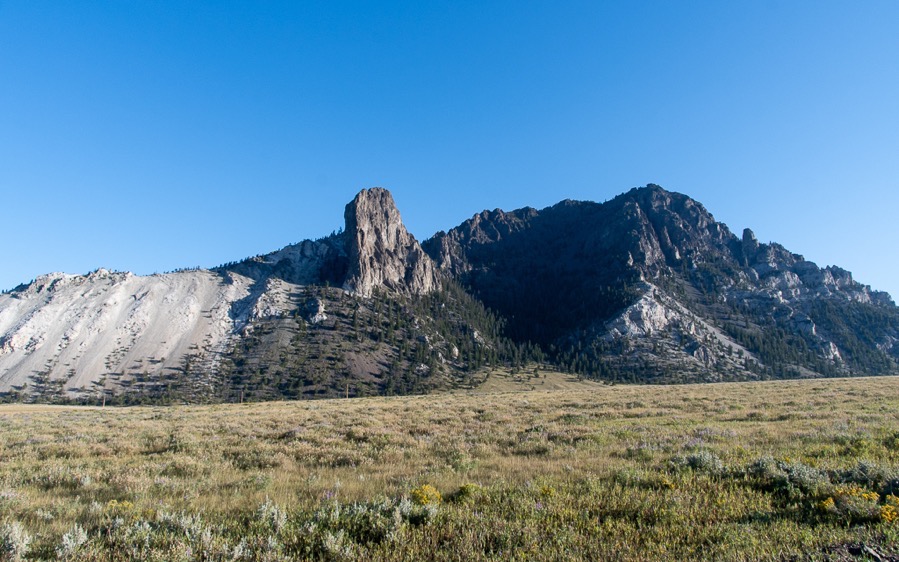 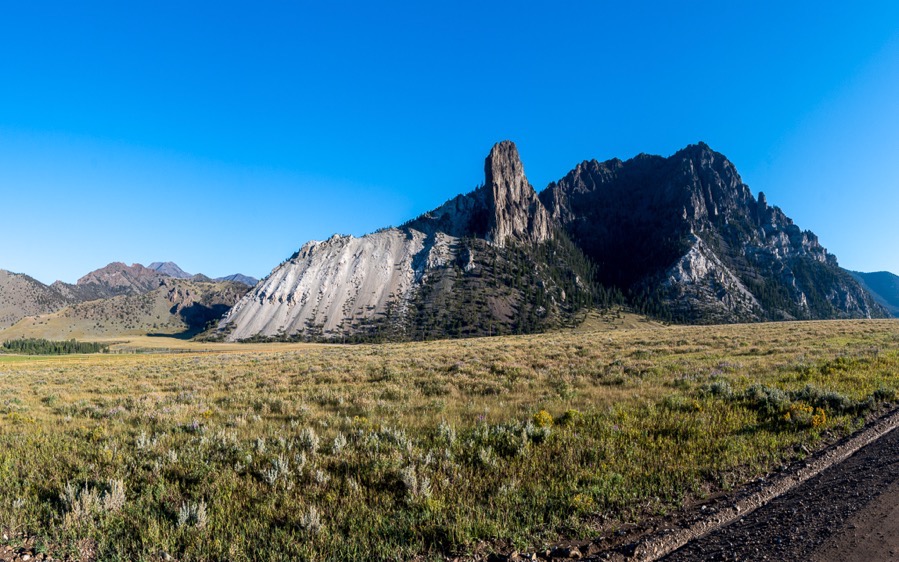 What was the surprise…well…it was an honest to goodness cattle drive. We didn’t get quite out as far down the “adventure portion of the tour” dirt road as we planned because we ran into this. 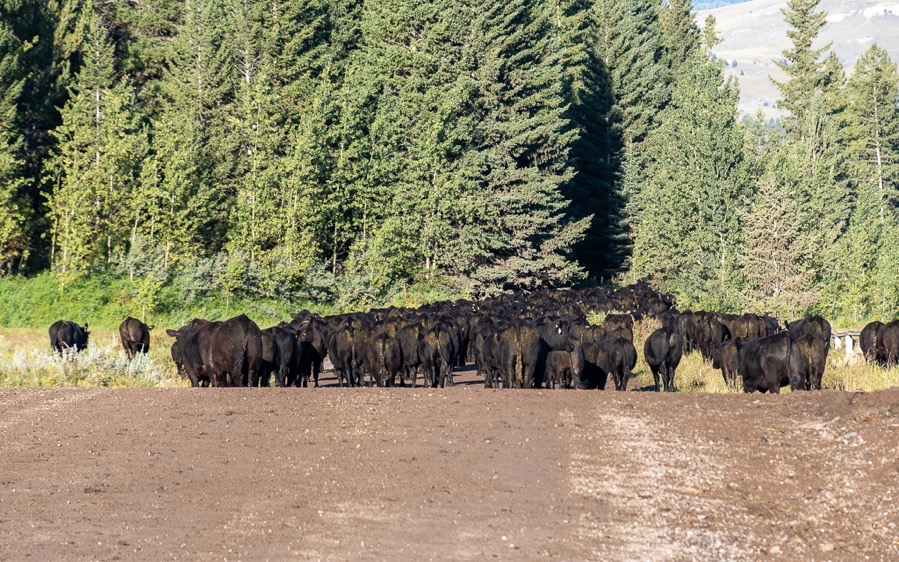 Yup…a whole heard of cattle being driven down the road from one pasture to someplace I guess. Here’s a couple of shots of the ranch hands in charge. 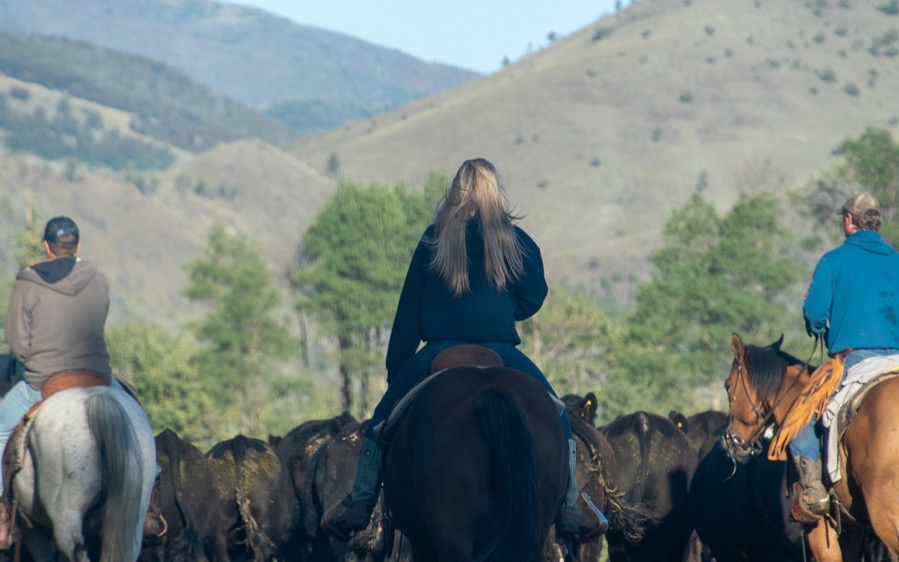 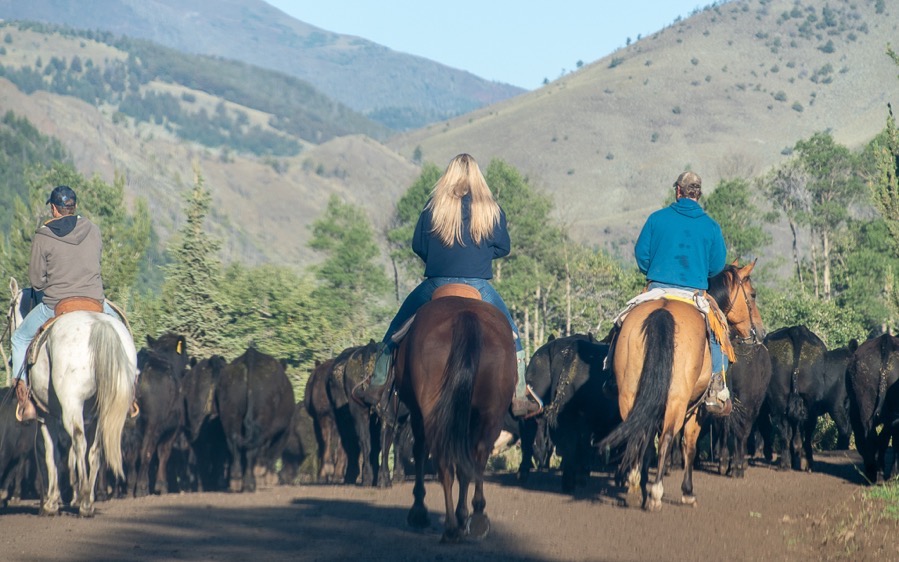 There’s something wrong with those people though…they’re supposed to be cowboys and cowgirls so what in the heck are they doing wearing baseball caps instead of 10 gallon Stetsons…I tellya…what’s the world coming to. And 2 of the 5 that we saw had on sneakers instead of boots…and to think they probably call themselves cowboys.

We followed along behind the herd for a few hundred yards then decided to give up and headed back. Once we got back off the dirt road and onto the paved highway…we did spot this doe mule deer alongside one of the switchbacks as we headed up towards Dead Indian Pass. 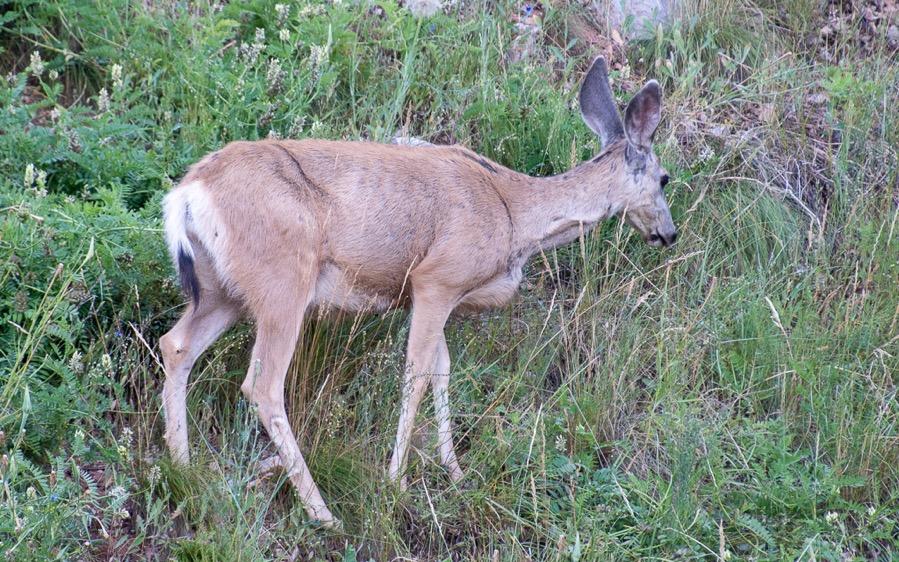 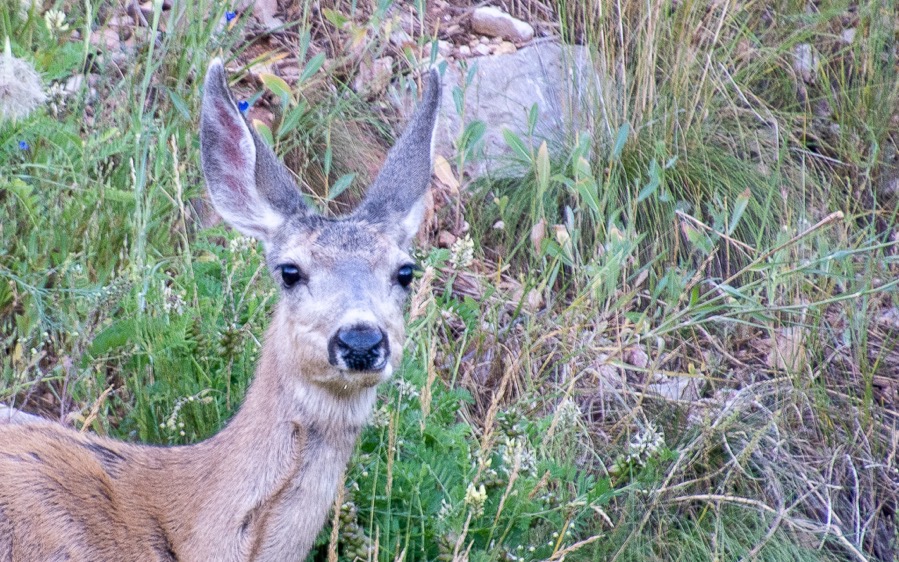 We were actually surprised to see her out that late in the day…it was going on to 1200 by the time we saw her.

We stopped at the Clark’s Fork Canyon overlook right before cresting Dead Indian Pass for some more views. 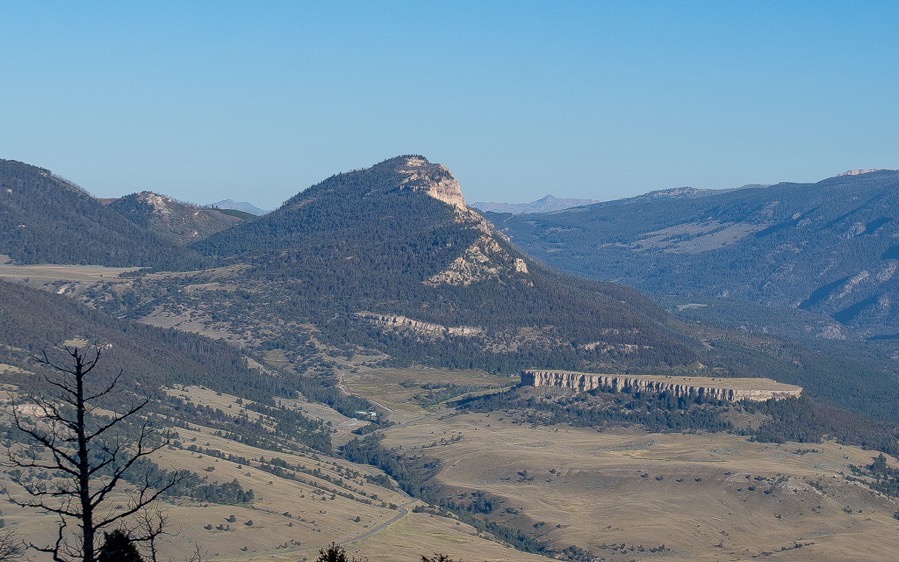 Overview of the canyon. 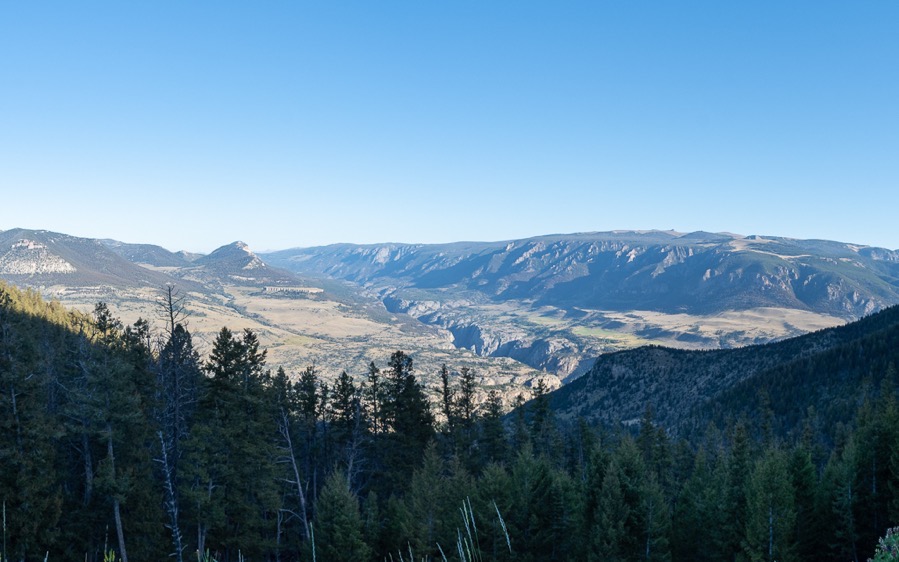 And a closer view…that’s the Clark’s Fork of the Yellowstone River down in that canyon. 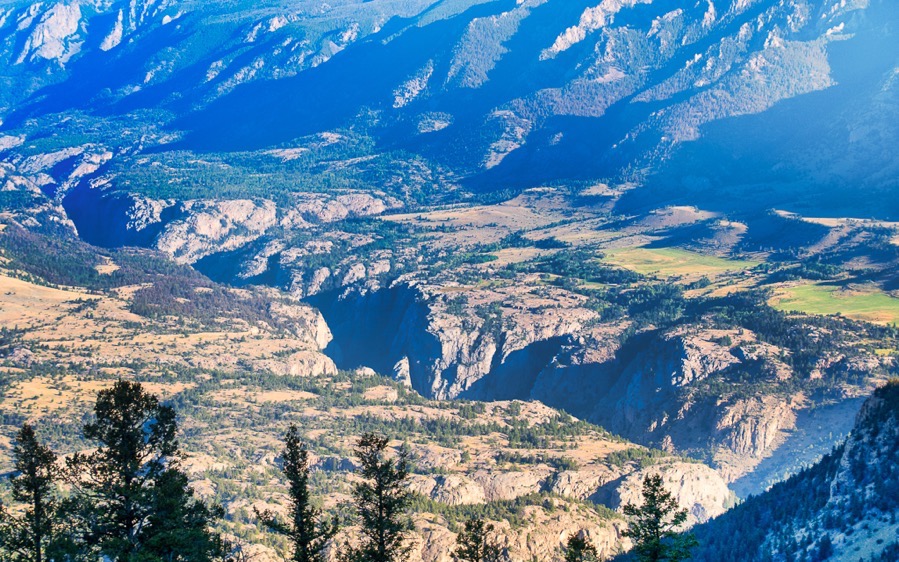 We crested the pass and continued back on to home.

Today…Neil will grill some country pork ribs for dinner along with rice and black beans…one of our favorite dishes. Then we’ll get packed up…we’ve sort of spread things out a bit more than typical for travel season as we’ve been here almost 7 weeks. Then tomorrow we’ll head 260 miles to Douglas WY then another 310 to North Platte NE for 4 nights…then the last 350 to Junction City KS to get the rig’s boo-boo on the LR slide skirt fixed along with a couple other minor repairs. Then we’ll head via Indianapolis to Elkhart IN for bearing and jack maintenance then back down to Cincinnati to continue our 50 eastern portion trip over to the coast before heading south for the winter like the birds do. 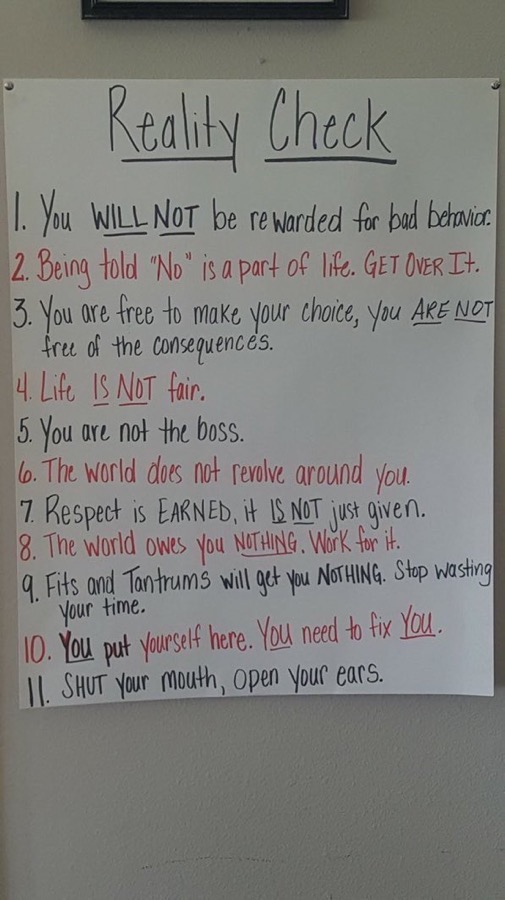 Baby Blue Marlin…these grow up to be up to 15 feet long including the bill although 8 feet or so is a pretty big male as females are 2-4 times the weight and longer as well. 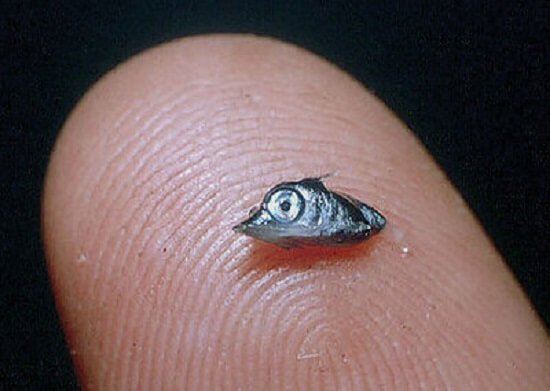 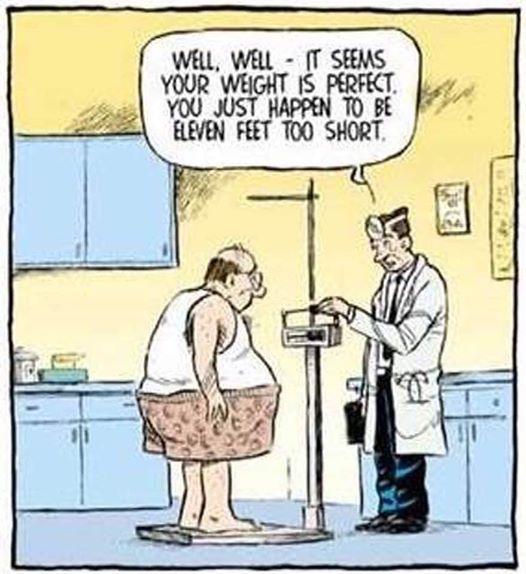 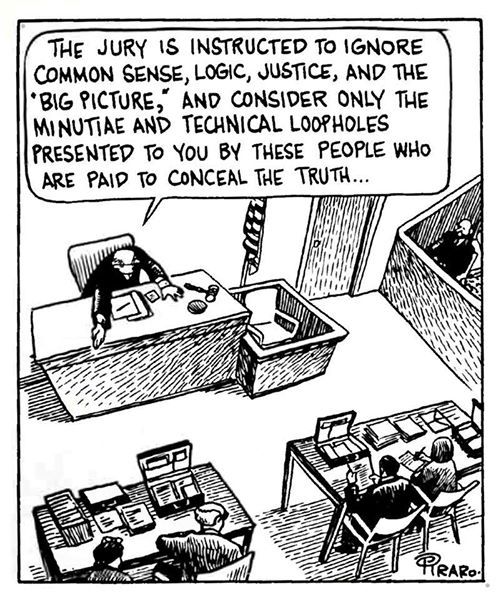 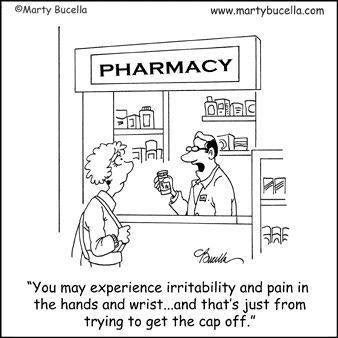 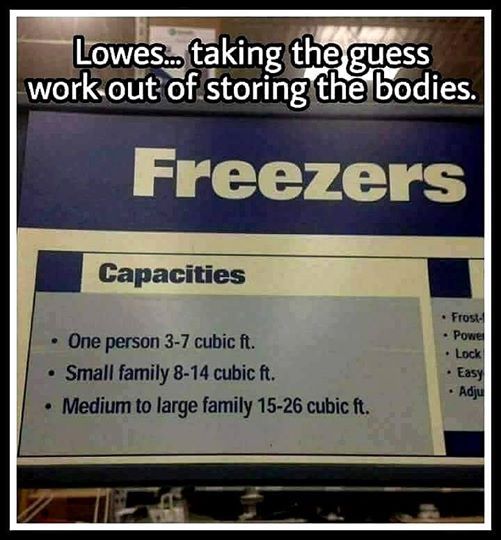 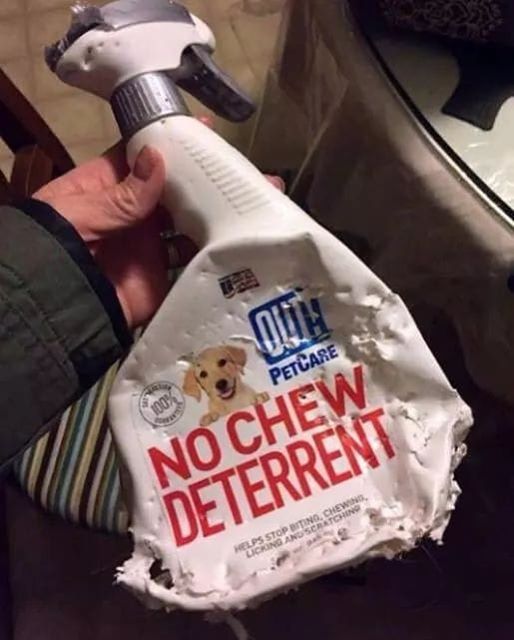 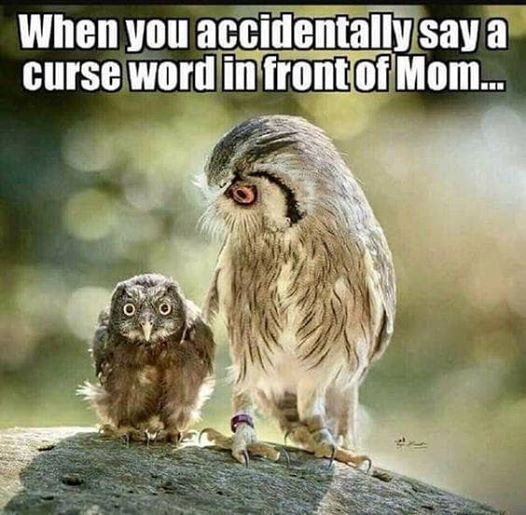 The look on the non speaking dog is pretty priceless…best I’ve seen in awhile. 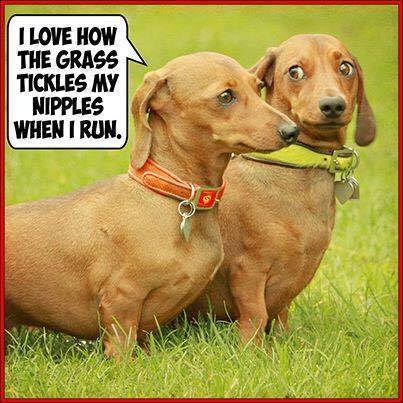