Transit to and Fun Stuff© in North Platte NE

Well…after finishing up Labor Day weekend in Cody WY…we were up and about early the next morning for our 600 mile trip to North Platte NE with an overnight stop in Douglas WY. We were out of the campground by about 0950 and headed south down US-20 through Wind River Canyon and Casper WY where we got on I-25 and continued on over to Douglas WY where we pulled into the KOA for the evening.

On arrival…we discovered that we broke the rear bolt in our LR slide deployment mechanism…haven’t broken one in almost 2 years as we figured out the correct way to position the rig to prevent this sort of occurrence previously. However…our site in Cody was somewhat less than level and we didn’t actually get ourselves leveled properly on the wheels with no twist to the rig before pulling in the rig. Luckily it was the rear bolt which is way easier to replace…and luckily Neil has 6 of them in the parts bin…so it was a pretty quick 20 minute or so repair to get ourselves fully functional again.

Why Douglas WY? Well…first and foremost it was more or less (actually slightly less) than halfway to North Platte but second we wanted to go and view the world record holder…as well as the previous world record holder…of one of the most feared creatures in the west.

This vicious beast can weight as probably 1,500 pounds…the size of a full grown bison…and I have to tell you it has many, many deadly weapons at it’s disposal. It can kick you with legs that have serious amounts of power such that a kick would fracture every bone in your body. It has tremendously long and razor sharp horns that can impale you. Finally…with it’s speed and agility it can easily chase you down, knock you down, and then sit down on you crushing the life out of you as surely as an anaconda or python.

So what is this deadly creature we went to see?

Why…it’s none other than the world famous Jackalope. It was first discovered in 1932 by Douglas Herrick and his unnamed brother when they brought one into a local taxidermy shop in Douglas WY. It’s since only been successfully hunted a few times…all around the Douglas WY area and many local drinking establishments have a taxidermied head of the fearsome beast hung on their walls. In fact…the 2 largest specimens ever taken have been mounted in their entirety and are on display in the town. Here they are…runner up first.

Mighty fearsome beasts I say…although the record holder seems sorta lean and mean compared to the runner up. In any event…I especially wouldn’t want to run into one in a dark alley outside of a drinking establishment…and since their favorite drink is whiskey that’s the most likely place to run into one. So…Pro Tip…when in Douglas if you’ve perhaps mebbe over-imbibed a bit jus’ make sure ya stay outa the gosh darned alley lest ye meet your doom.

We popped into a local restaurant for dinner…a brew each and some chicken wings and jalapeño poppers as we weren’t overly hungry before heading home to the rig.

Early the next morning…rinse and repeat. It was a quick setup since we only had slides, power, and front jacks to do…and Big Red remained hitched overnight. Back onto I-25 and then onto US-26 just north of the CO border. The GPS wanted us to stay on 25 and then take I-80 east…it prefers freeways to at grade roads. That way was 50 miles farther and we were mostly out in the middle of nowheresville WY and NE…so we took the road less traveled by. We did have to slow momentarily at 3 or 4 towns as we passed through…but otherwise easily maintained the same 64 mph cruise control speed we would have used on the freeway…so the couple of minutes we lost in the small towns were more than compensated for by the 50 mile shorter route.

Arriving in North Platte…we quickly set up in site 0 at the I-80 Lakeside Campground just east and south of the city. Neil dumped and flushed our tanks on arrival…the indicators were not working properly so we did our standard half full, add 4 gallons of vinegar and a cup of Dawn degreaser dish detergent and let it slosh around for 2 days travel to wash all the gunk off the inside of the tank. Our level indicators are ultrasonic based and read the fluid level from outside…but they do get confused by grease or stuff stuck on the inside of the tank and we routinely do this trick at least once during each travel season as well as again just before arriving in FL for the winter. After that it was leftovers for dinner from Labor Day.

Thursday…we were up early for the first of 3 Fun Stuff© outings here in North Platte…the Sandhill Crane Drive…it’s about a 30 mile loop around where the Sandhill Cranes roost during their migration. Actually they only roost here in the spring as they head north…in the fall as they head south they apparently don’t stop here…so we didn’t really think we would see any of them (we seen plenty of them in the past) but we figured we would see other waterfowl and that would make it worth the trip.

We headed out right at prime bird watching time…just after sunrise…but what we didn’t anticipate was it would be pretty seriously foggy and thus with limited visibility we would not see much.

We spotted 3 female mule deer walking through a field but were unable to get any photos before they disappeared into the woods. However…we had pulled into the driveway of a farm to try and catch them and we did spot a flock of wild turkeys.

Ya know…back in the 80s there was this movie Gorillas in the Mist that made Sigourney Weaver famous as she played the treehugger Diane Fossey…I wonder if I can get famous for Turkeys and Trees in the Mist? 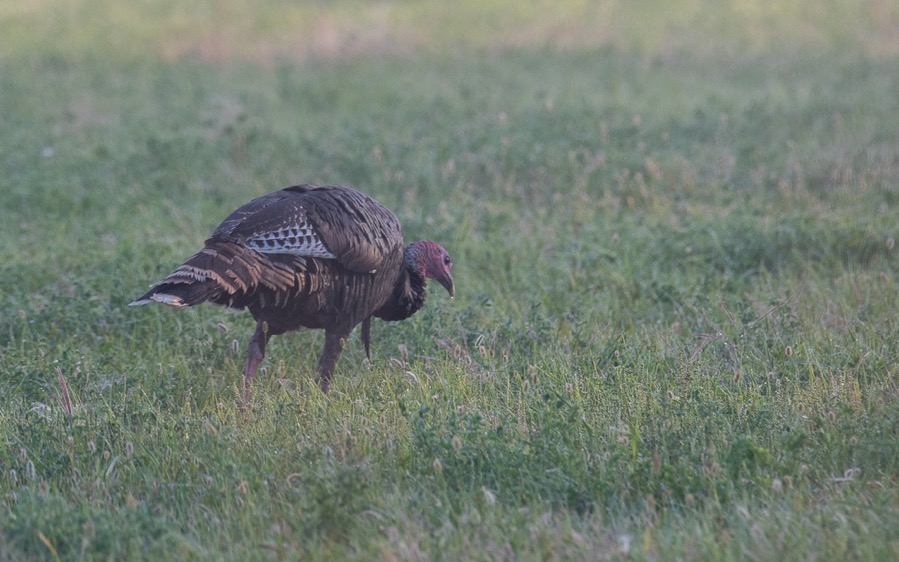 Neil especially liked this tree in the mist with the early morning sunrise behind and to the left.

As wildlife drives go it was pretty slim…but we did enjoy finding the turkeys…we ended up seeing 3 or 4 other rafters (that’s the term) of them as we proceeded on our drive. The term rafter comes from either the fact that large heavy birds like turkeys tend to roost on the branches of trees which are similar to rafters in height…or from the fact that when they panic their paths tend to crisscross and weave as they run and the root word from Arabic for weaving is raff.

We finished the day with a nap, lunch, and a steak that Neil broiled for dinner. He was too lazy to get the grill out for one meal…and it was hot…so he just dragged the Breville oven outside and used it instead. Not quite as tasty as a grilled one would have been…but we schmeared roasted garlic cloves all over it when it was done and that outstanding flavor covers a lot of other minor issues.

Friday we did laundry and a winery/brewery tour in town. The wine was good as was the beer and the pizza we had was the best one we’ve had in many months.

Saturday…we headed off on the Wild Horse Canyon Scenic Drive…but it turned out to be pretty much a bust. Nothing to see…not really a canyon that we would call a canyon, and no wildlife. We did spot some glossy ibis (they’re black) but they flew off before we could get a picture.