Today was another great day here in Gulf State Park. Connie had some work to do in the morning so Neil worked on some computer stuff and went running while she did that. Once she was done…we headed off to The Gulf for a burger and beer on the beach. Our friend Sparky from http://whereseldo.blogspot.com recommended this place as having most excellent burgers and she was right. We got really juicy burgers with some home made aioli dressing on them…Connie had cheddar cheese and Neil had spicy pepperjack; we had them along with a coupla cans of beer and they were quite delicious. We sat next to an older couple from Michigan who have retired down here and turned out they had visited a lot of places we have been as well.

After lunch we went to a local Winn Dixie that was supposed to have good beer and booze selections. We were looking for Maduro beer like we had in Cedar Key and for Cabin Fever maple flavored whiskey from New Hampshire…we struck out on both of these so we headed home for our final chore of the day…taxes.

We had finished and submitted our federal ones yesterday and dropped the Virginia ones off at the post office on the way to lunch…so all that was left was the Alabama ones for the timber company distributions. Luckily; Alabama has an online version now which is much, much easier than the old paper version was so we finished that up in about an hour and decided to have a little fun.

There is a trail here in the park named the Alligator Marsh Trail about two miles long or so. We walked over to the beginning and headed out. It sort of wanders through the marshy grassland to the north of the park and we saw some pretty decent birds on our walk.

First up was some nice white flowers that Connie found followed by a mourning dove up in a tree, a mockingbird, and a little brownish bird that we couldn’t identify very well. 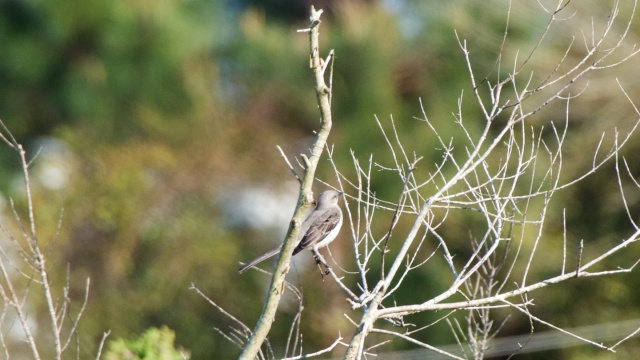 After that we hit on the mother lode of Red Winged Blackbirds. We’ve been hearing these critters all week but haven’t actually spotted any until today…when we spotted a bunch of them and got some nice pictures. Notice the little red and yellow epaulets they have on their shoulders as well as a couple that are sort of puffed up when calling for the females. It must be mating season because we saw a couple of dozen pairs swooping around in their mating rituals. We were  actually amazed that they’re this hard to see…our past experience has been that they just sit there and call and don’t care about people being around so it’s easy to get decent pictures. Connie is really glad we finally got to see some we can take pictures of. 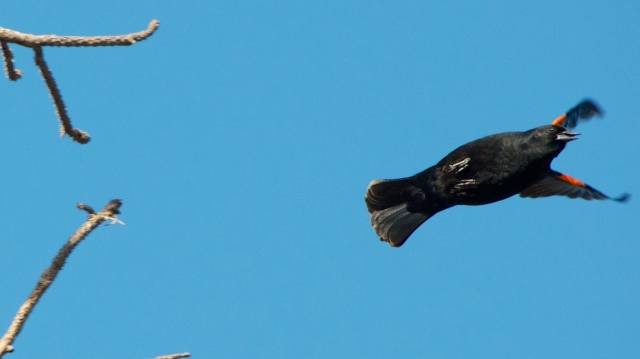 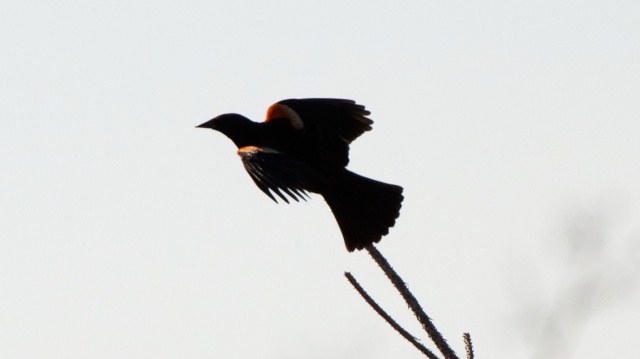 Dinner was left over ribs from last night with some rice; it was even better today after it had oodled awhile.