Well, another interesting couple of days. After our visit to the waterfalls the other day we decided to have Connie work on Saturday since she had a phone meeting with her boss and then to do the bike ride on Sunday. So, after Mass on Sunday including the shortest sermon we’ve ever heard…so short in fact that I can repeat the entire thing here…

Yup, that was it. Anyhoos; after Mass we changed into our bike shorts and headed off for a 19 mile as it turned out ride on the tow path of the now defunct Ohio and Erie Canal. It was constructed in the 1820s and 1830s and  carried cargo on barges pulled by mule teams until 1861 when competition from the faster and cheaper railroads killed it. It was declared a National Historic Landmark in 1966 and is largely similar to the Chesapeake and Ohio Canal in the Washington DC area…it runs right alongside the river (the Cuyahoga River in this case instead of the Potomac) and has a regulated depth as well as locks to eliminate any rapids or waterfalls that would impede traffic if the river was used instead. About half of our ride was along the one section of the canal that still has water in it and is used as a water supply for local industries. The remaining part was through some nice wooded areas.

Connie almost quit after 16 miles as her butt was getting sore. Neil told her that if she did he would change her name from Connie to DNF (did not finish)…then pulled a quote from Jens Voigt and told her to “Shutup Butt!!” instead of his original “Shutup legs.”. So she hardened up and made it to the end with a couple of extra butt-break stops. Along the way Neil grabbed a couple of shots from a bridge where we were crossing over the Cuyahoga River. 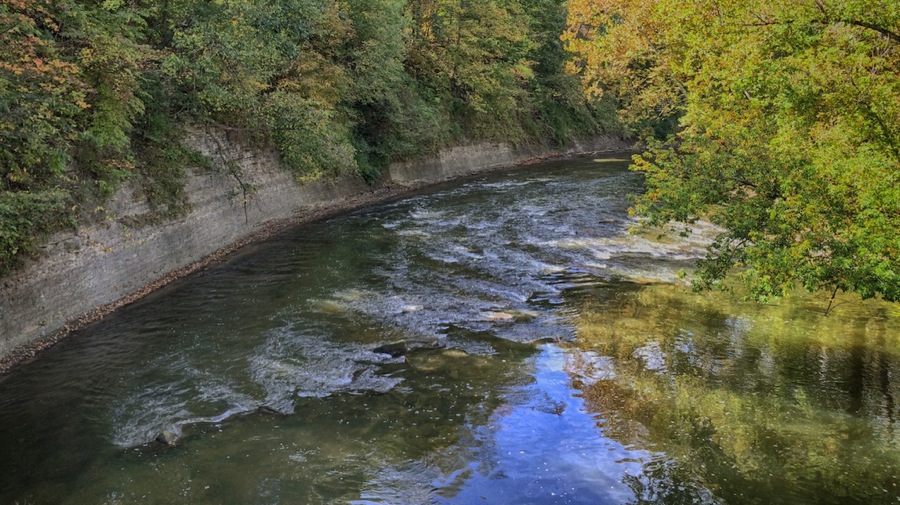 Following our ride we decided not to retrace the 19 mile ride back but instead used the Ride Aboard program of the Cuyahoga Valley Scenic Railroad that runs nearby the canal path. The scenic railroad runs high dollar sightseeing trips for tourists but since it passes several stations along the canal tow path they have a program where you can use the railroad to return to your starting point instead of having to either have an out and back ride or pre-position a second vehicle to drive back to the starting point. Three bucks a person for the Ride Aboard program so we were glad we took advantage of it. After getting off the station we figured out how to find where the car was parked again and came home for showers and a dinner of leftover barbecued pork ribs that Neil had done on the grill on Saturday.

Today Neil paid a couple of bills while Connie did 2 work items that had to be done today…then we headed off for some more Fun Stuff©…a hike at the Ledges area of Cuyahoga National Park. The ledges are a series of sharply eroded stone walls alongside the valley that runs through the park. We visited the overlook for some nice photos and then did the 2 mile loop trail…we thought that this would not be a destination hike but just a hike in the woods. Turned out that it had a lot of interesting geologic formations that we also got some pictures of.

First up…we spotted this Red Shouldered Hawk right as we left the parking area…then after a 200 yard or so walk had a nice picnic lunch at the overlook itself. 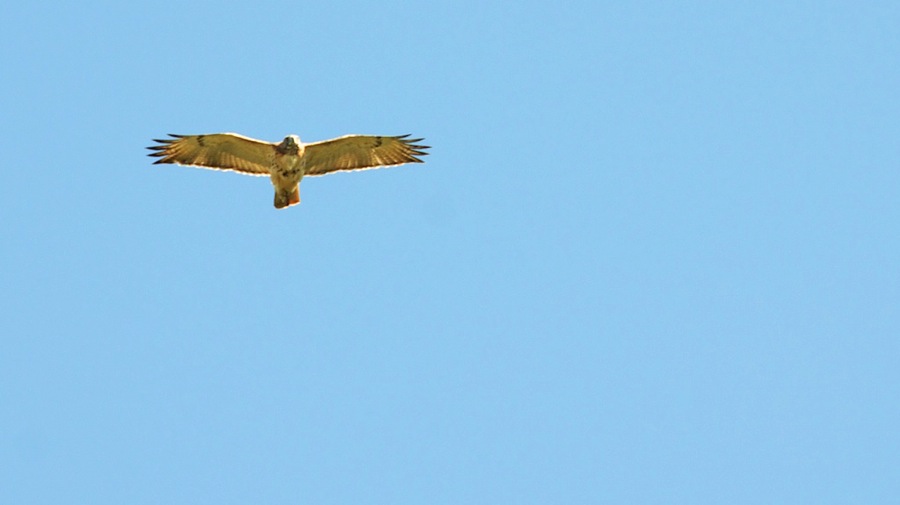 Not as cool as some overlook viewpoints we’ve seen but for the eastern part of the country with more foliage and lower mountains still it was a decent view. We then headed off on the hike. Essentially we hiked out to the left and down the back side of the ridge at the overlook then turned and walked underneath the ledge area for about a mile…then turned around the far end of the ledges, back up onto the ridge top and returned to our starting area. Only 2 miles but even with only 100 feet of elevation change we did that 100 feet up and back down multiple times. It was also quite rocky with lots of trip hazards so we called it a medium difficulty hike instead of the easy rating the length and elevation would normally earn it.

The first two shots are as we hiked underneath the overlook above…it’s right around the corner of the wall in the first shot.

Following that Neil took a short side hike into a box canyon like area where erosion had worn away parts of the ledge rock. 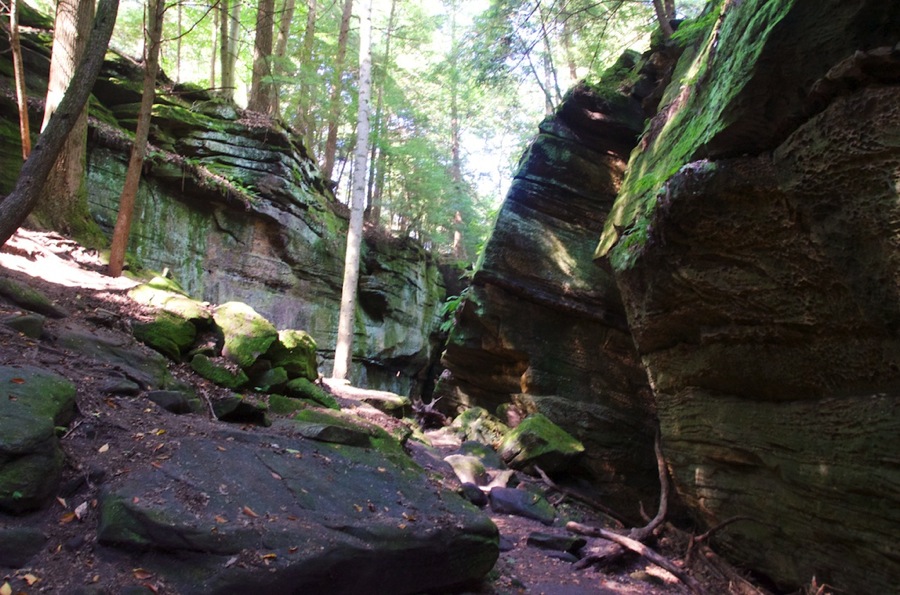 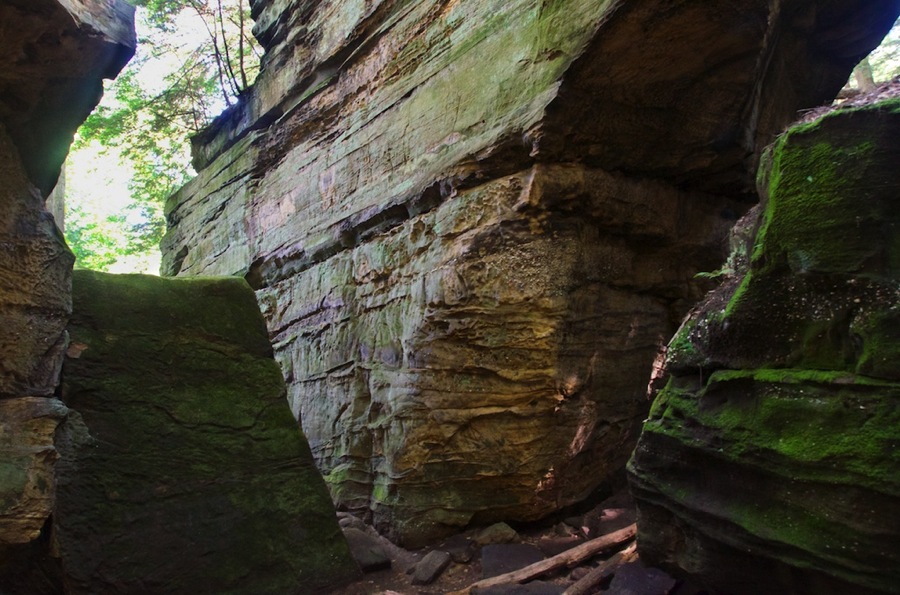 This last one shows some steps that were built using natural stone gathered from the area (we saw the flat area that remained of where they likely cut it) by the Park Service. The steps follow a naturally descending cleft in the rock face and the idea was to provide an easily walkable way down without making it look like a lot of construction had gone on.

We stopped by the Ice Cave which unfortunately is permanently closed to hikers as it contains a large, healthy bat population and the Park Service is trying to keep White Nose Syndrome from getting a foothold here in the park. White Nose Syndrome was identified in 2007 and is a fungus that grows around the muzzle of hibernating bats. It kills them by forcing them to awake early from hibernation (because they can’t breathe) and they starve to death before spring due to the multiple wake ups…and it has decimated a large number of bat populations in the eastern and northeastern US as well as eastern Canada. It typically kills 90% of a population within 5 years in an area once it gets started and has no treatment or means of preventing infection. We wouldn’t have gone far into the cave anyway since we aren’t the spelunking type…way too dark in there for us without lights…but couldn’t get close enough for even a decent picture of the entrance. Oh well.

With that we came home for showers. Tomorrow it’s supposed to rain so it will be a work/laundry day for us. Wednesday we’re off for a 1 night stop near Hagerstown MD then on to Centreville VA right near where we used to live in Fairfax for a week…we have a couple of dental maintenance and Connie’s work related things to do. After that we’ll head south to visit Bryan, Jen, and the bun-in-the-oven Neil 3.0 that they’ve been so studiously working on since the spring.