Back in Fort Myers…and Happy

Well…our trip north to Bradenton and Mayo for BAT and rig upgrades is finished; and as promised here’s what we got done this week.

After getting up really, really early Monday morning…we had to be in Bradenton about 75 miles up the road by 0830…we fueled up BAT and headed out. We had done all the pre-move stuff and hitched yesterday so all we had to do was power and slides so it was relatively easy but we were still up by 0430. We had two jobs scheduled at A and A Hitch up in Bradenton. First up was installation of a trailer hitch on the back of the rig so we can add a bike rack and get the bikes out of Connie’s car. It’s a pretty standard hitch…Neil forgot to take a shot but I’ll get him to get one tomorrow and put it up. If you’ve ever seen a trailer hitch…it looks just like ours; a square receiver sticking out the back that you insert the square part of the bike rack into.

Second up was installation of our 50 gallon TransferFlow auxiliary fuel tank for BAT. This consists of the tank which is bolted down in the front end of the bed and the control module which is mounted up on the dash. 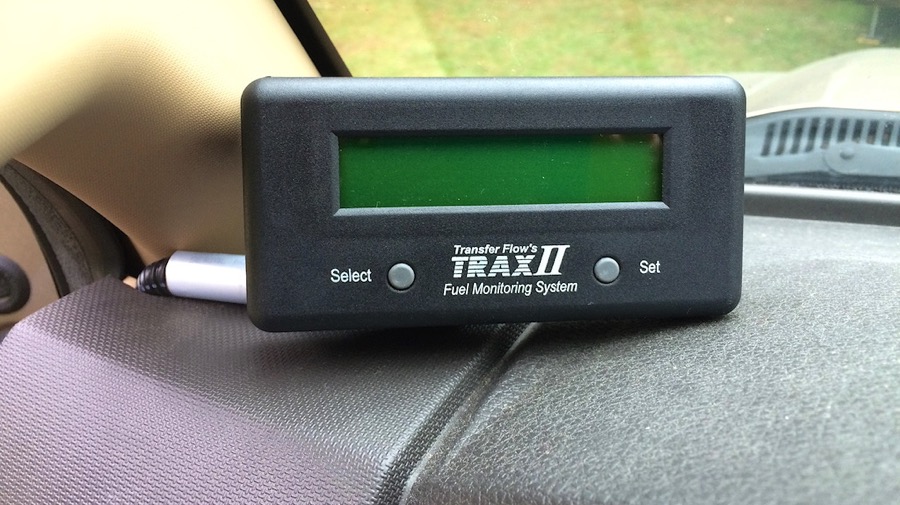 Ok…so how does this thing work. Well, it’s not connected directly to the main fuel tank so you fill it separately when you’re at the station. The main tank holds 37 gallons and the aux holds another 50…the total of 87 gives us about a 700 mile range before needing fuel…good thing as some of the stations up in Alaska next summer will be 400 miles apart. The little square thing sticking up on top of the aux tank has a filter and a transfer pump that pumps fuel from the aux tank into the main tank when it’s turned on at about a gallon per minute. The wiring harness included taps into the main tank level sensor as well as the aux tank level sensor and displays the amount of fuel in each tank on the little panel on the dash. The computer in the display panel basically monitors the main tank level and which it’s about 1/2 full pumps 3 or 4 gallons from aux to main tank…at least that’s how it’s supposed to work. Turns out that our computer is improperly calibrated and pumps at around 3/4 full on the main tank. In addition, it’s calibrated for a smaller tank than BAT has so when you completely fill the main tank the aux tank gauge indicates that it’s full but the standard fuel gauge in the dash says it’s empty. Once you get down to about 33 gallons (full is 37) in the main tank the standard gauge operates correctly. Neil has an appointment with A and A for Tuesday to get it properly calibrated. We’re glad to have the extra fuel on board…in addition to not having to stop on most travel days we can pick and choose our fueling stops so that we can avoid overpriced stations or states where fuel is more expensive.

The blue thing next to the aux tank in the bed picture is our water filter/softener combination…it rides in the truck bed when we are traveling.

We had a fantastic Cuban sandwich across the street from A and A while they were doing the installs and headed out about 1400 or so. After some consolation between Connie and Neil we decided to head on up to Wildwood and stop at the KOA there overnight. That was about 100 miles up the road leaving only about 120 left for Tuesday before arrival at Mayo for the solar panel install.

We got parked, did minimal hookups for utilities and had a pizza up in Wildwood…and went bed early. Tuesday we lollygagged around and didn’t leave the park until the 1100 checkout time…we only had 120 miles left to go and our install wasn’t starting until Wednesday morning so getting there anytime Tuesday afternoon was just fine.

We arrived in Mayo and got parked in the yard at Palmer Energy Systems owned and operated by John Palmer. I gotta tell ya…John and his helper Tracy are perfectly competent solar panel installers but Connie started to wonder if we would hear banjos while we were there. John is 70 years old and is one of the prototypical good old boys…or a prepper or something. Everything he owns is on wheels “in case something happens”…whatever that means. Anyway…we got plugged into his 30 amp outlet and had filled up our water tank before leaving Wildwood so we were half way boon docking while we were there.

Tuesday morning bright and early John and Tracy got started…they couldn’t go up on the roof until the dew evaporated so John got started installing the solar controller down in the forward end of the basement right near the battery compartment.

So…how does this whole solar thing work. Normally when we’re plugged in everything is powered from AC power from the power pedestal on the site but when you’re moving or boon docking obviously there isn’t a power pedestal. In these situations the only power sources are the battery or your generator. The generator produces AC power just like the power pedestal does and you use that power by plugging the standard RV power cord into the generator. Battery power is DC instead of AC and is 12 volts instead of 120 volts…so we have a thing called an inverter which turns the 12 VDC into 120 VAC for running appliances and such. When the battery is depleted it’s recharged by one of two methods. In normal operation…AC power comes in from the generator or shore power and runs back through the inverter…which also contains circuits that turn 120 VAC into 12VDC which then recharges the battery. The batteries can also be recharged by the solar panels. The solar panels on the roof produce DC when the sun is shining and make about 22 volts each. Our 8 panels are hooked up in two sets of 4 so they produce a total of 88 VDC. This power is fed down to the solar controller which turns the 88 VDC into 12 VDC and recharges the batteries. Actually the output voltage of the solar controller varies from about 12.5 volts to 14 volts depending on how much the batteries are depleted…if they are half used then you start with a higher voltage for bulk charging…then shift to a lower voltage for absorb charging until all then to an even lower voltage for float charging to maintain the batteries full.

The solar panels are great at doing the absorb and float charging but not as efficient for the bulk charging phase…which is why when you’re boon docking you normally run the generator a short while each morning to get the bulk portion of the charge done then shift over to solar about 1000 or so to finish the absorb charge portion. Between running the generator for an hour or so and the power you get from the solar panels…along with managing how much power you’re using overnight so as not to run short on a day to day basis.

From an operational standpoint…essentially one just monitors how far discharged your batteries are and use or minimizes power draw based on that. Our batteries have a total of 800 amp hours which means we can use 400 amp hours before recharging on an ongoing basis…you shouldn’t discharge more than about 50% or so on a routine basis to maximize battery lifetime. Our residential fridge uses about 120 amp hours per 24 hour period…so we have about 280 available for other usage on a daily boon docking basis. This means we can use lights, computers, and even TV for 3-4 hours per night without worrying about running out of power. One of our jobs for the next couple of months is to try boon docking for  3 or 4 days just to get a good feel for how much power we use on a daily basis when we’re trying to conserve…essentially we’re going to boon dock here in Seminole and we can always just plug in if we run short.

Here’s what our panels look like…there are 4 on the front end of the rig and the second set of  4 on the left side over the kitchen.

The last picture shows a closeup of the brackets that mount the panels to the roof…these are on the aft panels. The brackets allow you to raise or lower one side of the panels when you’re mounting them…this allows (in our case) them to be mounted so that they panels are horizontal when you’re parked as this portion of our roof slopes to the rear. Forward is to the right in the picture above and this is the aft end of the first panel on the right with the forward end of the second panel on the left…the forward end of the first panel has the lower bracket similar to what you see above…this tilts the panel a little forward which is just enough to counteract the downward slope of the roof as it goes back. The gray stuff over the brackets is sealant and both glues the panel to the roof (in addition to the two screws holding each bracket down) and seals the screw holes and heads to make sure no water can leak into the roof. The sealant takes a few days to fully dry and will tend to smooth itself out while it does.

We were done with our installation and testing by the end of the day on Thursday…it went a little faster than anticipated since Neil helped Tracy screw the panels down on the roof…it’s a lot easier to install them with two people than one. They aren’t heavy…only about 18 pounds or so each…but they are 21 by 48 inches so getting them aligned nicely so the installation looks pleasing to the eye is easier with 4 hands rather than just 2.

Since we were done…we headed out early Friday morning for the 330 mile drive back down here to Fort Myers. Arrived and got parked by about 1630, went out to Hogbody’s for wings and brews for dinner, and came home and went to bed.

Saturday we did a lot of our setup for long term stays…put up all our lights and outside decorations, repacked the car with the bikes under the front of the rig so we have a back seat again, and similar stuff. Dinner was leftover chicken and taters and then we watched Bama defeat Mississippi State in another great game.

3 Responses to Back in Fort Myers…and Happy