Hanging Out with Friends

We’ve been hanging out with our friends Bill and Linda the last couple of days…they arrived on New Years Day and came over for some grilled Polish Sausage from Delta Meats up in Alaska and football. We grilled, chatted, ate and polished the evening off with some caramel pecan brownies that Neil made.

Saturday they came over again and we did some work on both our 5ver and then went over and did some work on theirs. Replaced door locks on both, fixed a bad water valve on ours; and took a look at their sticking bathroom door but decided we didn’t have the right tool (a plane) to properly fix it. Neil and Bill did talk about what he needed to do but he’ll have to get some help from a woodworker friend back up at their home in NC. After that we had some grilled steaks and the rest of the brownies over at their rig which is about a mile east of us in Upriver Campground.

Sunday afternoon they came over again and Neil made some gumbo…he had used the remains and bone from our Christmas Honey Baked Ham to make some excellent stock. A little onion, celery and bell pepper, some flour and olive oil to make a nice roux…a couple of sliced up Andouille sausages…and then added the stock, some extra chicken stock…and a couple of tablespoons of file powder of course since it wouldn’t be gumbo without file…and let it simmer awhile. Served over rice with some nice Merlot and ice cream for dessert and it was pretty good.

Monday we had arranged to go see the new Star Wars movie Episode 6: The Force Awakens. We saw the first 3 movies released in the franchise…the original Episode 4 and also Episodes 5 and 6…but had not seen Episodes 1 through 3. The Force Awakens is Episode 6…essentially the whole franchise is a trilogy of trilogies with the middle three being issued first and covering a net time period of about 10 years or so. Episodes 1-3 were released next and are set about 60 years before the original Episode 4. Episode 7 picks up about 10 or 15 years after Episode 6.

What struck us most was the that Episode 7 is almost a remake of the original Episode 4…the names and characters are different but largely the plot is the same as the original. The original Han Solo, Princess Leia and Luke Skywalker make appearances. Same scrolling credits back to the background…same great music and lots of stuff getting blown up.

I don’t to have too many spoilers for those of you who may not have seen it yet…but at the last scene Chewbacca and the Millennium Falcon jump at light speed to a distant planet in a galaxy far far away…and land on this small island. As the aerial shot zoomed around the island…Connie and Neil turned to each other and said “we recognize that island”. After the Falcon landed the heroine went climbing up these stone stairs and we said “we have climbed those stairs”…and then there was the climactic scent at the top with the heroine and somebody you will recognize from an earlier episode…and again we said “we’ve stood right there”. Sure enough…the final scene was filmed on Skellig Michael off the southwest tip of Ireland…as you’ll recall we visited it in summer 2014 on our Ireland travels. The monastery, the stone steps, the beehive huts…all were very familiar looking to us.

Here’s where the final scene was filmed. The two shots are taken from opposite sides of the same little grassy area…the first one is looking north towards Little Skellig Michael and the second one was taken with Neil standing right at he bottom of the wall you can see in the first shot. 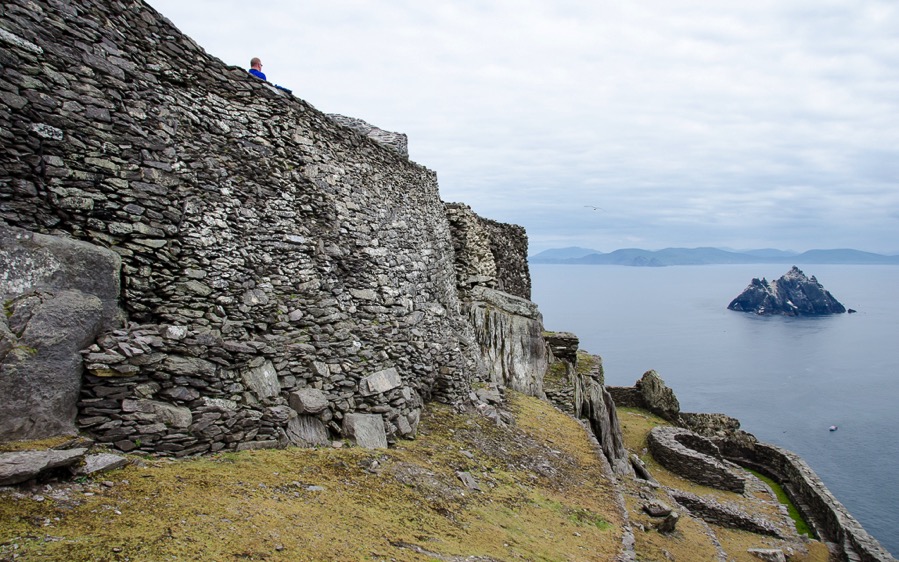 For the climactic scene…the camera was positioned a little to the right of where this shot was taken from with the heroine up by the wall and the character you’ll recognize from an earlier episode was standing near the wall to the left. Connie was really impressed that we had already been there.

Tomorrow Bill and Linda are seeing some other friends while Connie works…then we’ll do the normal choir practice/computer club thing on Tuesday afternoon and then Bingo. Wednesday we’ll meet up with our friend Sandy from the Alaska trip along with Bill and Linda for dinner somewhere. Don’t know quite yet what the later stages of the week will bring…but we’ll figure out something.

2 Responses to Hanging Out with Friends