Well…our time here at Camp Horizons has improved considerably since our previous visits. While I still wouldn’t call it fast and efficient…our experience overall was much improved. My guess is that the old culture of laissez-faire slow rolling everything started at the top of the company. Phil was a great guy and ran a good company…but at heart he was a banker/bean counter type and some of the production and service stuff just wasn’t his forte. Bryan T who is now the CEO with the company owned by Karen (Phil’s widow as he passed back around Christmas) was formerly with another RV builder as a senior manager and has managed to institute a good deal of promptness and efficiency. There’s still a ways to go since cultures don’t change overnight…but all in all we were much more pleased with our experience the past week.

As you know…we arrived shortly after noon on Friday May 19 for our service appointment last Monday May 22. Our original work list only consisted of having the seals replaced on our slides as they were dissolving on the side that’s faced the southern sun the past 5 years down in Fort Myers. By the time we got here we had discovered two more problems…our power cord reel was shot and needed replacement and somewhere along the way a truck in a truck stop dinged the side of the rig just forward of the entrance door…so we added those two items.

We were in the service building early Monday morning by about 0830 and Mike/Jeffrey got right to work on the seals. They were pretty much done with those by Wednesday midday and even the one that we thought would be really hard to do…the forward galley seal…turned out to  be easier than we thought it would be. It’s not a perfect, good as brand new production seal installation would be…but given that the other alternative would be to remove the slide entirely which means disassembling and reassembling the cabinets, gas lines, plumbing in the kitchen and countertops…it’s good enough.

Our old power reel feed off the bottom of the reel to the outside…and naturally this model is no longer made and New Horizons has moved along to a new vendor for this item…which feeds off of the top. We had just a small door (it’s been remounted in the new big door in the photo below) that let the plug go out but no maintenance was really possible. Ken here at New Horizons spent a couple hours looking for a new bottom feed reel to no avail and we were starting to think about just having the old style twist plug put in instead and storing the cord separately when Mike came up with what turned out to be the winning idea. His suggestion was to remove the small door and cut a big enough door to allow replacement or maintenance on the reel without disassembling the rig…then to remount the little door at the top of the big door for the new top feed reel. So that’s what we did…here’s a shot of our newly installed an painted door. The small door that the cord is coming out of used to be mounted down where the handle on the new door is located. The little door to the right is the cover over the switch to operate the reel.

Here’s a shot with the large door open. Without this door they would have had to remove the entire lower fiberglass panel you can see in the first shot along with the horizontal trim strip and the vertical trim strip that you could see if the photo covered another 2 or 3 inches to the right. That’s about 6 hours of labor to remove and reinstall and usually results in some paint cracking which means more painting, more masking, and the associated cost. Mike’s idea was that since he’s replaced a half dozen of these power cord reels just this year he might as well make it easier on either himself or a future repairman to work on the reel as needed.

To make sure we can still get power when/if this power reel fails…we also added a transfer switch and the old style twist plug up in the basement so in the event of a failure we can stick a twist dongle into the old twist style connector and plug it into a regular 50 amp extension cord. The transfer switch serves to ensure that you can’t plug in both the standard cord and the emergency connection simultaneously…that could make things go boom.

We were done with work and paint about 1500 Friday and Ken moved us around to the south end of the building with the forklift. We did attempt to find a place to stay over the upcoming Memorial Day weekend but to no avail…even the KOA in Goodland KS (our next stop) was full. We didn’t figure they would be as Goodland is a farm town in the middle of western KS…but they could get us in Monday instead of Tuesday as everybody checks out on the Monday holiday. That didn’t make much sense so we’ll just hang out here and leave Tuesday morning.

We met up here with Robert Schwartz…he’s a fellow Floridian and PI who does a lot of work for wrongfully convicted people. Both our friend Bill Napier and Neil have answered many questions, emails, and phone calls for him as he designed his rig and got it built…and then run into the various problems that new RV owners run into.

We’ll do laundry and grocery shopping over the weekend and basically chill out for the holiday. Tuesday morning we’ll meet again with Ken, pay our bill, and get on the road.

We did have to spend Thursday night in a local hotel…they were painting and doing clear coat until about 2200 and the clear coat really stinks…and you can’t turn on any ventilation as it will cause dust to settle on the not yet dry clear coat.

Okay, on to interesting things.

This is a great way to lighten up the mood at your next Thanksgiving family celebration. 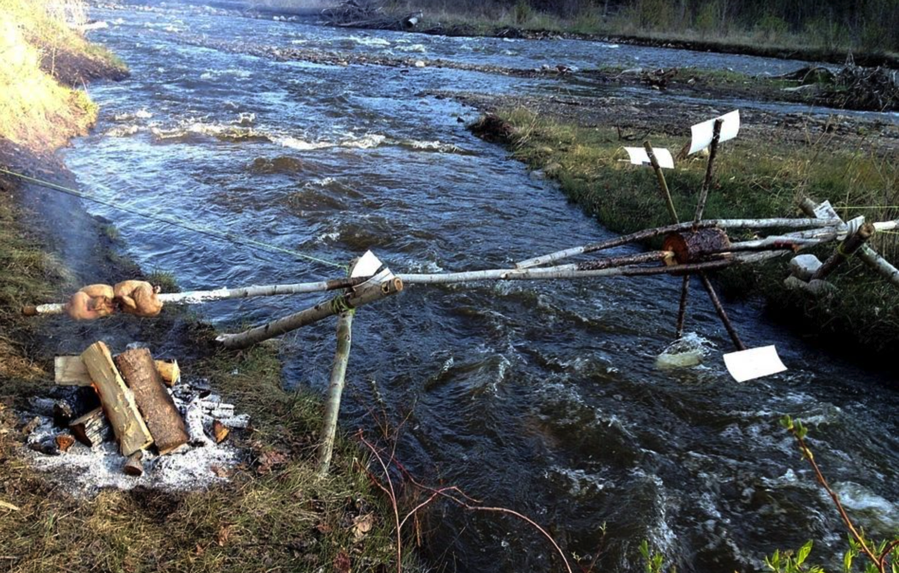 My next post should be from Goodland KS next week sometime…although other than chill out I’m not sure we’re really going to do anything there.