OK, last post of the travel season…obviously I’ll keep posting during the winter but as we’re not doing nearly as much Fun Stuff© a lot of it will just be daily life.

Wednesday Nov 1 we came to the end of our 11 day stay at the Low Key Hideaway in Cedar Key. I need to give a shout to Steve from northern GA who we met there…he gave us 4 bottles of wine he made and brought another 2 over the last night before he left to go along with the steak and taters that Neil cooked…well, actually he brought the steak too as it was already thawed out and needed to get eaten and Neil was going to make hash for dinner as we had spent way too long hanging out at the Tiki Bar drinking brews. Anyways…he was there with his Sheltie Collie Cooper who was about the most laid back dog ya ever seen. Just laid there and watched the world go by.

We made our reservations for the last 10 days of October next year at the LKH…then hitched up and hit the road about 0830 or so for the 280 mile trip down to Fort Myers. We arrived and pulled into Seminole Campground right about 1330. We had 7 packages of various sorts waiting for us…new grill, new zero gravity recliners as ours were falling apart, and various other things we needed to get and pretty quickly got pulled into our site 101 for the 6th consecutive winter season. Neil spent the rest of the afternoon and most of the next morning doing outside setup while Connie did inside setup.

Other than that…we ain’t done much. Had dinner at the Elks a couple times, went to Bingo, went to Mass on Sunday, Neil had a few bike rides, and that’s been about it.

Here’s a shot of our setup…amazingly enough it looks almost the same as last year’s setup.

We do have all new gravel in our site…all the sites on this side of the park got sort of washed out by the water from the creek during Hurricane Irma…and the tree that used to sit just near where our flagpole is came down during the storm as well. We’ve also got new sod along the side of our site and patio .

Connie made us a nice little Thanksgiving decoration for the picnic table. 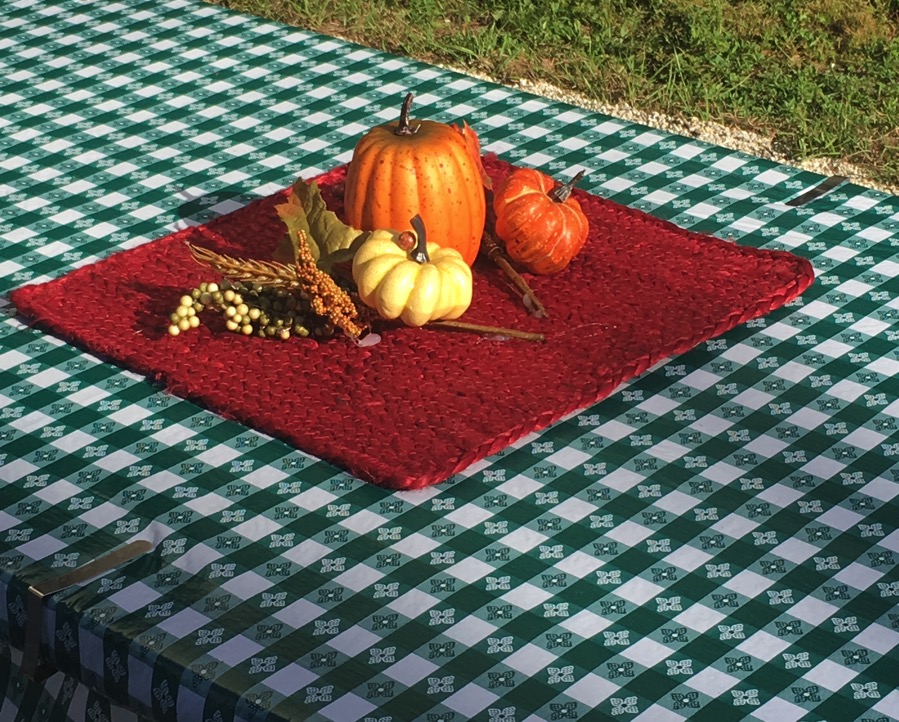 Our friend Jeff is here…but he’s got a friend from TN here with him for a couple weeks so we haven’t seen him too much to catch up…Doug is leaving tomorrow or Monday so we’ll see him at Bingo and such now. Connie put in her application to become a real Elk in addition to being a member of Ladies of Elks…Neil sponsored her and she found a couple other members to recommend her as well.

That’s about it I guess…oh yeah, about that new family member thing. As you recall when we were up in IN in May 16 to pick up Big Red Connie had a detached retina that needed surgery…long story short is that she was better by the time we left Fort Myers this past spring but had basically not been able to drive for most of the year from May 2016 to May 2017. Luckily…our 11 year old 176,000 mile Mazda 6 needed some expensive repairs that just weren’t worth it the week after her eye problem…so we donated it to the Catholic Charities up in IN and have been using Big Red as our daily driver the past year in addition to pulling the rig around. After being single vehicle RVers for a year…while it works just fine…there are some drawbacks. Low mileage even when not towing…let’s face it Big Red ain’t an economy vehicle…along with the pain of parking way away from everything convinced us it was time to get another vehicle again for our daily driver. So with no further ado…let me introduce you to the newest member of our traveling menagerie…Little Red.

Little Red…we’re pretty sure that it’s a she…is a 2017 Mazda CX-5 Touring…she drives pretty similarly to the Mazda 6 we donated. We researched and test drove it last along with a Ford Escape and a Toyota RAV4…all 3 look almost identical as we were looking for a 4 door lift back with enough storage so that we could keep the hiking bin and the cooler in the car without blocking the back seat. We eliminated the RAV4 pretty quickly…it was the most expensive of the 3 and had the most uncomfortable seats we’ve sat in for quite awhile. The Mazda has better fit and finish inside than the Escape did…has more features…and was cheaper besides. We did all our testing in one day, bought the next day, and picked up on Monday.

Only in New Zealand.

When you lie on your resume but get the job anyway.

Why is there a man on the toilet on my phone?