And Then More Life Happened…

Well…I wish I could say that really cool stuff happened in the last 18 days…but then I would be fibbin’…so I won’t say that. Instead I’ll just admit that nuttin’ really interesting happened and bore you with the details of the mostly minor stuff that we been doing.

We did get to spend last Sunday evening at the emergency room at Gulf Coast Medical Center. Connie started feeling bad last Thursday afternoon and was pretty sure it was another diverticulitis attack…her last full one was back in 2003 or so. She’s had a couple of kinda sorta it was coming on over the years since but has usually been able to control it with more fiber and forcing fluids. She was feeling worse on Friday but decided to try and make it until Monday morning then call her GI doctor for an appointment and evaluation. That worked pretty well until Sunday when she decided to have Neil take her in as it was just hurting too bad by evening.

Long story short…it was actually a pretty decent ER visit by time standards…we arrived at 1815 and were on the way home shortly after 2100 including evaluation, a CT scan to verify the diagnosis, and getting some prescriptions to get filled.

Long story longer…the PA she saw actually gave her two antibiotics…one was Flagyl which is well known to mess up your stomach. The second was Cipro which is contraindicated for retina surgery patients…that was listed in her record with Lee Health but prescribed anyway…we did not get the Cipro filled. Second was the Tramidol they gave her for pain…it’s contraindicated with Cipro…but then we didn’t fill the Cipro so that was still OK. Next morning…she called her GI doctor and they told her to cease and desist taking Cipro and take the Augmentin they were prescribing instead as the second antibiotic.

She’s on the mend…the diverticulitis is getting better and the nausea medication is keeping her from tossing her cookies…and she’s quit taking the Tramidol since it messes with her head and the pain is better. She’s of the opinion that the cure is almost worse than the disease…she’s not in pain any more but feeling sick to her stomach all the time sucks she says.

Wednesday we drove over to West Palm Beach to get her dependent DoD ID renewed…it expires next month. It’s a little Naval Support Center where we went and they actually had more security than the Pentagon back in then days when Neil worked in the 5 sided puzzle palace. It’s only good until she turns 65 in 2019 as is Neil’s ID…so we’ll both need renewals in 2019 once we become Medicare and Tricare for Life eligible.

We got another overdue bill for her cataract surgery last March…it’s a paperwork drill and we’ve now talked to Bascom Palmer 4 times trying to get it resolved. The problem is that even though we’re Tricare for insurance and Bascom Palmer is a Tricare in-network provider…the surgery center in Naples was newly opened when she had her surgery. Tricare had already paid for the vitrectomy she got in October of 2016 over in Miami…and rightly collected the Tricare co-pay in March 2017 when she had the cataract surgery…but then Tricare rejected the claim. There were two problems…first was that the Naples surgery facility had no federal facility number assigned yet and second once they did the facility has to be activated with Tricare. We’ve ben round this with Bascom Palmer billing folks 3 times before today including a 3 way phone conversation with Connie, Bascom, and Tricare…and explained to Bascom that they need to fix the problem to get paid. We’re making progress…they now have a facility number but it’s still not activated. So Neil called the Patient Services folks instead and spoke to them…supposedly Giovanni will be chasing this down and getting it fixed and the claim resubmitted. We won’t know unless/until he calls us back and says it’s fixed or until we get the next overdue bill notice next month.

In other news…well, there really isn’t much other news. We cancelled a lot of planned activities this week due to Connie’s not feeling well…in fact we cancelled pretty much everything but the trip over to West Palm to get her ID and visit her mom and dad’s graves…but then we had an appointment for that and she wasn’t driving so feeling miserable in the car is no worse than feeling miserable at home.

The eaglets E10 and E11 are still growing as you can see in the screen capture below…one of the adults is on the right side and the babies…although they’re not babies much at this point just about 58 days after hatching…are in the center and left. They should be fledging (taking their first flight) in another 14-30 days. 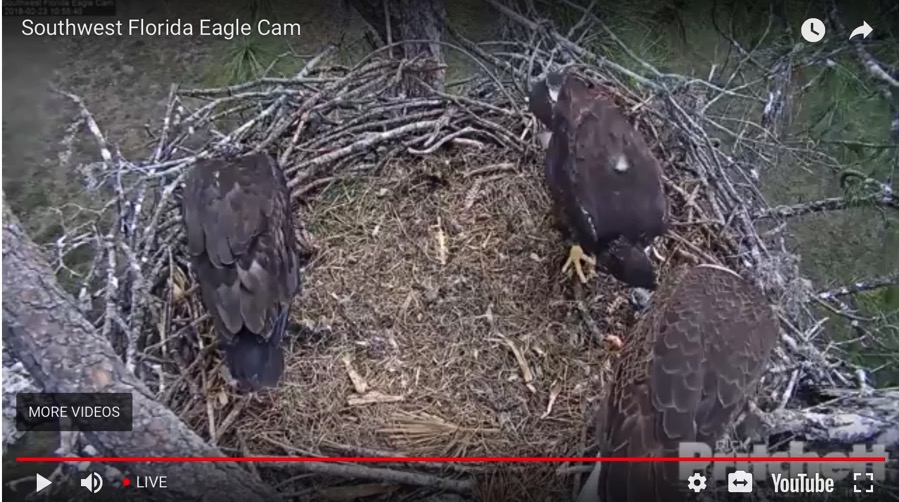 Neil’s been following a couple of ongoing discussions on his favorite RV forum at RV-Dreams…the first one is this ‘expert’ who claims that he’s going to buy his RV solar panels directly from China and thus get around the ‘outrageous’ markup that the suppliers here in the US charge and that with this 400 watts of solar and ‘massive’ (according to him) battery capacity of 400 amp hours will enable him to live completely off grid without a generator in the southwest where he can get a campground for the entire winter for a cost of $550…total. He’s been told that that’s not enough solar or battery capacity…and that parking for $550 a year might be possible but then you have to get water and dump tanks somehow…but his mind’s made up and he doesn’t want to be confused by the facts. The second one is this guy that says his inverter manual tells him to turn it off when he’s not using it to ‘increase it’s lifespan’. Again…he’s been told that turning electronic equipment on and off is far worse than just leaving it on…and that whatever loads are running off of the inverter usually won’t work at all without the inverter on because of how RVs are typically wired…but again he doesn’t want to be confused by the facts.

This is what happens on your “Welcome to Heaven” tour. 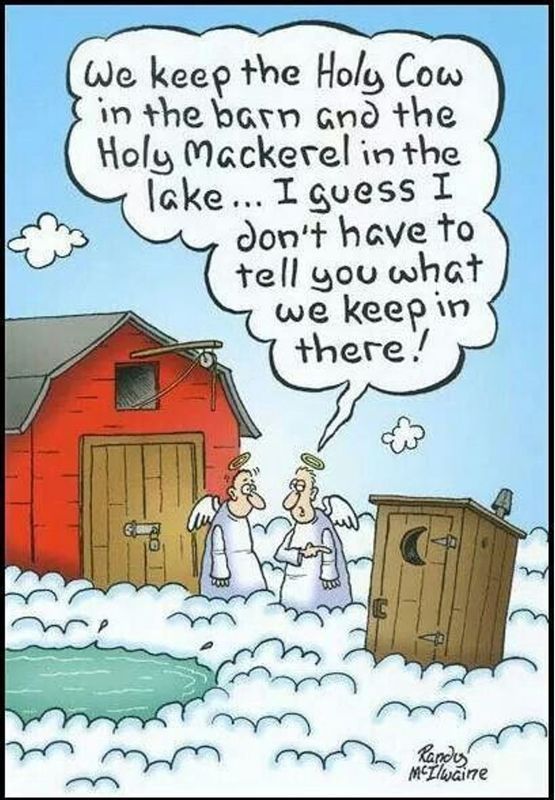 Proof positive that technology…while it may be complicated…ain’t necessarily smart. What happens at your IKEA job interview.

Supposedly…these are actual tenant complaints to the council in the UK. 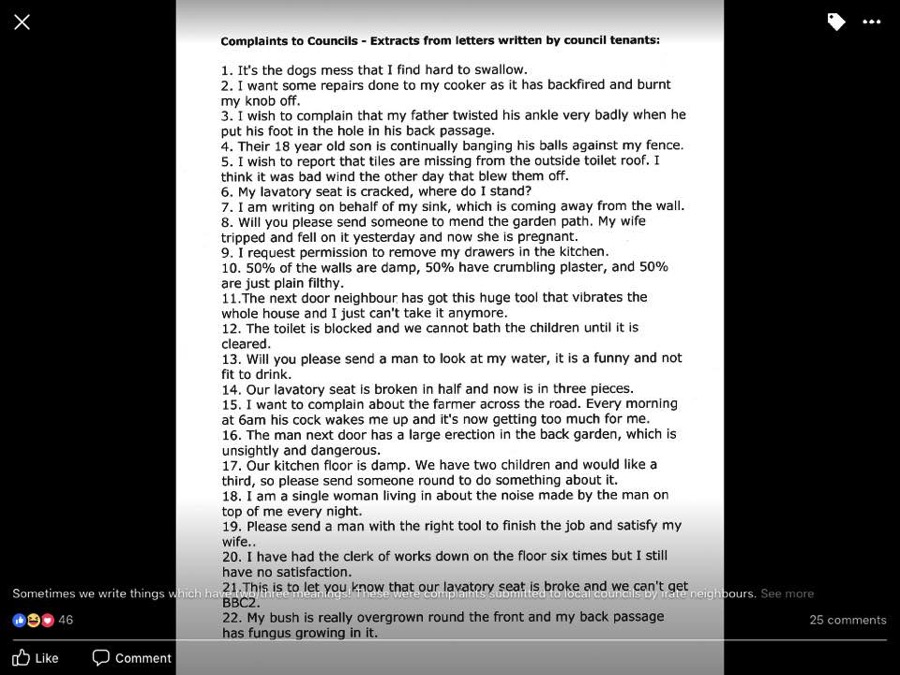 And finally…the most ridiculous politically correct (or politically incorrect or perhaps even stupid depending on your point of view) apology ever goes to New York University (NYU) as described on this web page.  No picture…but for those who don’t follow the link the cafeteria there served watermelon flavored water and collard greens for lunch one day during Black History Month. One of their snowflake students complained to NYU administration that this was “racially insensitive” and “stereotypical”. NYU has publicly apologized and lambasted Aramark (their food service provider) as being inexcusably insensitive. Aramark in turn has fired all employees involved…including the head of food service…because of their “longstanding commitment to diversity and inclusion.” Seems to me that some people are just looking for things to be offended over.

Two comments on that web page illustrate the absurdity of this argument. The article itself refers to deferring to black students to determine what is valid to serve during Black History Month. The first comment says that it’s insensitive to focus on traditional black culture food selections and simultaneously says it’s insensitive not to focus on them…and the poster is confused. The second one asks if this means that it would be insensitive to serve bratwurst and sauerkraut during Oktoberfest or Potato Soup on Saint Patricks Day.

Inmates running the asylum I tell ya…way, way, way too damn much political correctness. Even the commenters on the article that admit to being black/brown/African American/race descriptive term of your choice think this is stupid.

1 Response to And Then More Life Happened…